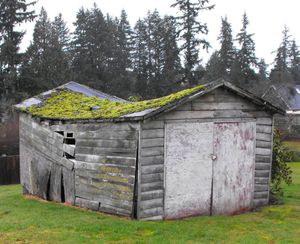 What remains of Elmyra's Glue Shop, the location where Sticky Fingers was first performed.

Sticky fingers was first practiced by an unknown hero 378 years ago in Elmyra's Glue Shop located in present day Tradeburg. The unknown hero accidentally lifted his hand and knocked over a very large bucket of glue which was sitting on the counter. From that point on, everything he touched in Elmyra's Glue Shop instantly became stuck to him, and Elmyra was forced to give them away for free, since she couldn't get the coins off of his hand.

Realizing he had discovered a newfound skill, he honed it through four decades of meditation, and 40 tonnes of glue. He then passed knowledge of sticky fingers to his son who passed it onto his son and so on, mostly because they couldn't unstick from each other.

Sticky fingers remained solely within the unknown hero's family for three hundred years until one descendant was tricked into revealing the skill when his hands got stuck onto a bar wench's skirt. Since then, the skill has spread throughout the land, and heroes can buy 'stick-kits' online at God-a-zon.

The hero carries a small bottle of glue around with them, and sometimes remembers to put it on their hands while trading. However, they have not yet learned to avoid rubbing their eyes and will likely end up with their eyelids glued shut.

The hero's sticky fingers are definitely tackier than they were before, but not enough to stop the trader from yanking money out of them. With each object traded the skill becomes less effective, as the trader's filthy shop inevitably causes lint and dust to build up between the hero's fingers.

With a better understanding of glue, the hero is now able to make their own and not have to rely on the smelly rubbish sold to the masses. Prices naturally increase as the hero no longer smells like a giant vat of rotting fish. The glue on the hero's hands is much, much stickier, and traders often find themselves resorting to crowbars to pry the gold out of the hero's sticky hands.

The hero has become one with the glue, their hands so thickly covered with it that it has merged with their skin. Everything they touch becomes instantly sticky, and they no longer need to top up the glue - it replicates itself. The hero's glue soaked hands are the fear of traders far and wide, as both coins and objects, once touched, will never be parted from the hero again.

Hero and glue are so deeply intertwined that it has reformed their DNA, and they have started drinking it as a form of sustenance. Sticky glue seeps from every pore. Even the hero's breath feels sticky. Rather than allow these gluey-heroes into their stores, traders would rather just chuck money at them from afar. 50 points for a coin to the eye.