The Spice Worms(Ubi vermis condimentum), exactly as the name indicates, begin their lives in shakers of spice. The spice is the worm and the worm is the spice.

Although they may be born small, they can grow to an enormous 18 feet in length! They are exceedingly rare as they are all cannibalistic; resulting in the near-extinction of their race (they also thoroughly enjoy a good roasted hero). The main strength of the spice worm is the ability to play dead. Since spice worms do not have faces, heroes can't tell what a spice worm is up to or even which end is which! Many heroes have died tragically because of this foul trickery. Many gods have been forced to resurrect their heroes after witnessing a slow choking from the spice clouds of the vicious creatures. 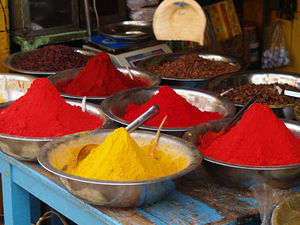 Young Spice Worms, pale when first hatched, can be seen emerging from these dishes.

The spoons are thought to have been placed there as substitute mothers. This was a pointless exercise because the Spice Worm is not a maternal animal and the young do not imprint, as the breeder quickly found out to the cost of most of his body parts.

There are as many varieties of spice worms as there are spices. For example, paprika spice worms are orange, energetic, and hot to the touch. Conversely, pepper spice worms, are black, white, and red in color and slow. Some pepper spice worms have been known to give heroes explosive diarrhea (remember this rhyme: "black-red-white it'll come out with might").

Since spice worms are also very tasty, many people consider them a delicacy. Chefs from fancy restaurants routinely pay thousands of coins for a few spice worm hides.