From GodWiki
(Redirected from Spar)
Jump to navigation Jump to search 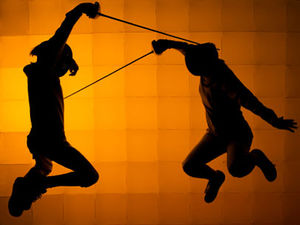 Sparring fights are similar to normal arena's duels, but only take place between friends.[1]

They can be started by using the Spar a Friend button on the Remote Control.

The effort needed to forge the telepathic link with another hero means that to participate a hero must be atleast level 7[2].

Strangely enough, these duels are staged purely in the imagination of the two participating heroes so nobody is hurt (physically) in these friendly fights and no duel records are affected,[2] making these fights very useful if a hero needs to gain some experience quickly without the risk of dropping down a few places in the pantheon.

The Coach achievement is awarded to heroes who spar with at least 10 friends, and Coach, 1st rank requires sparring at least once with 200 different friends.

To commence a sparring fight, select "Sparring fight" from the menu in a friend's chat window, or "Spar a Friend" from the Remote Control and select a friend from the list. This action requires 50% godpower.

From the Remote Control, friends who your hero has sparred with before are marked with a [✓] (on web) or ✓ (in app) to assist with the Coach achievement.[3]

The list can also be searched by typing all or part of a god or hero's name, and on web is an extra option to display only friends with whom your hero has not sparred yet.

When a god initiates a spar, the challenged god will receive a notification allowing them to accept the challenge if they are not currently on an adventure.

The challenger's hero will drop everything and go into a trance while waiting for the other party to respond. This includes all forms of quests, healing at town, selling off loot, shopping, praying or fighting a monster. Likewise, when the friend accepts the spar invite they will drop everything they are doing immediately.

If the friend doesn't respond to the challenge within five minutes, or is not currently able to spar, the hero will return to their business after waiting for 5 minutes.

Coordinating your challenge with a friend when they are online and chatting with you via private messages is wise, to avoid wasting godpower. A message will automatically show up in the private chat between the involved gods informing them that the attempt to spar has timed out.

However, during the fight, the higher leveled hero can use the encourage influence or voice commands to heal to their actual maximum health.[4]

Once the fight is over, the heroes will return to questing and their health returns to whatever it was before the sparring fight began.

End of the Spar

Unlike fights in the arena, the winner of a spar will not gain the loser's gold coins and inventory.

However, the winner will gain one percentage point of experience.