The Smooth Criminal (Criminalibus lubricus) is a monster known for lurking in nightclubs and wearing a fancy white suit.

Heroes instantly know they have encountered a Smooth Criminal because he'll always begin a fight by flipping a gold coin across the room and very skillfully landing it perfectly into the coin slot of a jukebox. Most heroes see that impressive display of skill and say "screw this, I ain't fighting you." Some heroes are not that smart.

Heroes who think they've been hit by a Smooth Criminal are advised to put a sign in the window.

The Smooth Criminal has been known to blow white billiards chalk powder into the eyes of heroes. 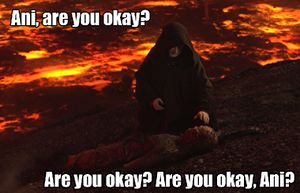 A hero who ran into the bedroom after encountering a Smooth Criminal.