This shield seems to be shaped from a combination of reflective duct tape heat bonded to meta-material, which causes the light to reflect the best, wildest dreams or scariest, most horrifying nightmare of the hero hitting it. No one knows how to determine which force-field "feature" the shield will reflect. Either way, it is very powerful as the opposing hero will either stand still staring at the possibilities or run away…screaming. 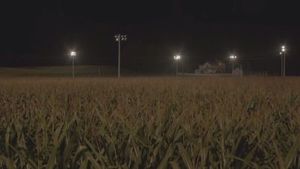 Creation site on the Field of Special Magic

Created on the Field of Special Magic, it is rumored that this shield was created through a rare collaboration between a wizard and a blacksmith in an effort to make one of the best shields in Godville that did not require any upgrades nor sockets in order to be superior to all other shields. However, since the methods utilized were not approved by Godville Admin nor followed the required Equipment template, the shield after being hammered together developed a "mind of its own" and began to reflect the wizard's best dreams and the blacksmith's worst nightmares. They began to argue about the merits and value of the shield, since they had literally opposite perspectives of its underlying qualities. After many months of discussion, they finally decided to put it on the market as a prototype so they would personally never have to see it again. They hoped that the hero would only experience the good, dreamy side of the shield and could avoid the temptation of its darker, nightmarish side. They vowed to never work together again, least they create something steeped in even further mystery.