Scarepion is a monster that resides in the Desert of Former Alkies. It is a nocturnal scorpion that glows in the dark.

Scarepions are gained their name for glowing a bright green at night, making a ghostly appearance that scares many who pass by. They also are extremely aggressive and will attack anyone without hesitation. The venom in their stingers is not deadly, but has an effect that makes victims extremely energetic or terrified. Most deaths caused by this monster are heart attacks. During the day, Scarepions burrow into the ground and sleep until it becomes dark outside and they start to glow. When they leave the underground, many witnesses describe it to look like ghosts rising from their graves.

Killing a Scarepion is not too difficult. Bug spray or anything heavy is enough to kill one quickly. 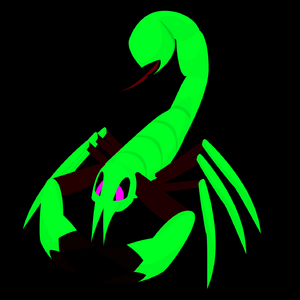 A scarepion glowing in the dark.