The Rock Lobster is a mad monster and is best served with butter and a slice of lemon.

The rock lobster was a chill crustacean many years ago. He would hang out in the beaches of Last Resort, sipping from coconuts and playig guitar.

One day came a punk orc band to town, the lobster was amazed by their performance and decided to take a swift turn towards harder musical horizons. His tranquil melodies became shredding chords, his straw hat was sliding down by the days, the lobster was getting rad beyond measure.

The last straw was the act of climbing upon a palm tree to rock a solo. The very same night the authorities hunted down the lobster, legend has it his guitar was played by lightnings while the guards were taking his body down.

Even though the original rock lobster passed away, many admirers and imitators have carried out his legacy.Flexing their muscles and rocking their guitars to honor his memory, they are obviously challenging all heroes they see, with often terrible outcomes. 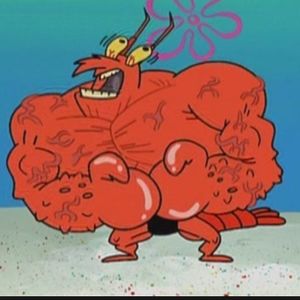 a fan of the rock lobster

There even is a monument dedicated to him in the real world, located in Barcelona. We suppose that in some unknown era, a troupe of rock lobsters invaded the city's beach and left this statue as a memorial. The simplicity of the structure and the absurdity of it all renders this as a plausible explanation. 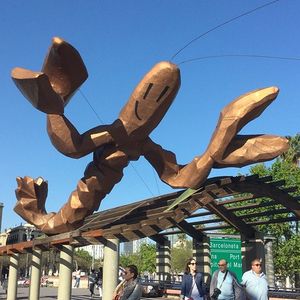 this is the lobster monument in Barcelona

A song for our hero

A band of bards called the B-52's wrote an ode recalling the night they met the rock lobster. It goes like this: