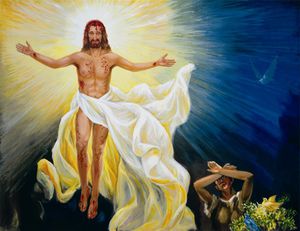 Every day, hundreds of heroes die from the vicious monster attacks. Although death is a sorrowful event, it can be remedied. The cure for death is known as resurrection.

Essentially, resurrection involves a god raising their heroine from the dead so that they can carry on doing stupid things in their god's holy name. The method used varies, but usually involves a rusty defibrillator (possibly found in the guts of a dead monster, ironically deceased due to a myocardial infarction) and if the heroine is lucky, their god will use powerful anesthetic to make the process less of an annoyance (i.e. lots and lots of beer).

More cautious gods tend to call an ambulance (or at least teleport it to the scene without even asking), but when all else fails, a god can always just let the dumb heroine die and then go and make a deal with an anthropomorphic representation of death. The reaper of souls is bound by universal law to honor their contract, so no worries there then.