Many a hero has unwittingly uttered his/her fatuous last words when confronted with the Purple Hero Eater, a creature of vile malignancy found in rocky, medium-to-high altitude regions.

The sight of a Purple Hero Eater descending a cliff face in total silence, its bright skirt rippling with unnatural motion as it levitates a hand's span from the bare rock, is enough to make any sensible person retreat. This is why the creature is called a Hero Eater.

This monster, while capable of digesting almost any material, only attacks living creatures. From a young adult age Purple Hero Eaters can easily swallow a human being whole, measuring as they do from three to five metres in length. Once a hero(ine) is swallowed, the creature's stomach acids begin to break down his/her equipment, causing damage if not total destruction unless his/her god intervenes to rescue his/her from death. 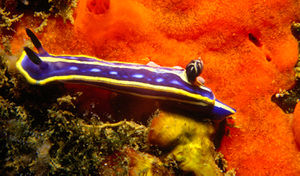 The colour-blind Purple Hero Eater believes itself to be perfectly camouflaged against this volcanic rock face.