From GodWiki
(Redirected from Prayers)
Jump to navigation Jump to search 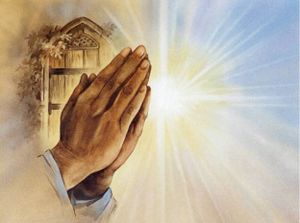 Prayer can be anything the heroine does to worship her Goddess, and it's the main way of restoring Godpower.

After Encouraging a heroine over and over again, or Punishing the incapacitated pawn, a Goddess loses energy, also known as GP. There are quite a few ways of regaining Godpower: by the Sacrifice of an enemy, using an Accumulator charge, or the most basic method known as prayer. This method regains 15%+ of GP to the Diety.

Prayer can be initiated by sending down a Voice of god with a message to praise the Lord, or more commonly the heroine does it of her own accord at a wayside shrine, a temple, or at a bamboo grove with a friend. They may also pray in Town, when Resurrected, or in a Temple.

!Tip!↻
There is word that a heroine's prayers will get a boost when their Goddess has been active listening to and judging the ideas of other Goddesses and Gods in the Ideabox. The Goddess must have volunteered enough of their time to have voted on at least 50% of all the ideas in the previous 48 hours, then while worshipping the heroine will receive a sign that her prayer was more powerful and she will make a note in her diary. This bonus will boost all prayers over a 24 hour period and it can be maintained consecutively if the Goddess remains an active voter in the Ideabox.[1]

When the heroine goes to Temple they usually donate money, therefore increasing the amount of GP earned.

Rumor has it that donating 100 gold coins or less restores 20% of GP. The more gold donated by the heroine, the more it increases GP, even so much as to fill the GP to 100%. A good approximation for gain in GP is (gold coins donated - 100) / 10 + 20, which is 80% accurate according to the data collected so far. In Last Resort, substitute 10 with the number 5. The heroine's gold is worth more because of their relaxed mental state. This formula seems to work best in all towns except Los Demonos and San Satanos (I wonder why godless towns are worse!), so there is probably a coefficient in the actual formula which varies depending on the town the heroine is in.

The first step is to roll out a carpet to keep the holy site clean. It must be the preferred color of the Goddess. Next, the worshipper must perform the ritualistic dance his God programmed into him at birth. This dance symbolizes the birth and death, the love and hate, and the undying bond between the Human and their God

After 10 minutes of continuous dancing, the hero must actually say the prayers. The prayer book given to him at birth is taken out and flipped open to a random page. If the page selected is blank, then the hero must make one up.

The final step is the most important. Once finished, the body should be glowing. This glow is the prayer that was said manifesting itself in the real world. The hero must then focus this prayer into a collimated beam and send it through to his dominant hand. He must concentrate and fling the prayer westward, towards the Trans-Astral Highway, for it to reach the God for whom it is meant.