The Pie Assassin is a monster.

Pie Assassins belong to the "Rogue's Brotherhood" and as other Assassin's type in Godville, pretty deadly. Pie Assassins have comedy-classic but intensive combat skills.

A lot of heroes and heroines have underestimated Pie Assassins, wondering why they hold pies in a fight. The thing is, those pies are their main weapon. With the pies, they stun the opponents by smashing the pies on their faces, making them shocked, disoriented and blind for a while. Second step is defeating the opponent or even kill them, depends on what their mission is, to bring the victim dead or alive.

Pie Assassins are mostly hired for Kidnapping, since they're specialized of mostly Stealth Attacks. They are also able for Assassination but they would take longer time to finish the job than the other Type of Assassins, especially when the target is secured by a lot of people. 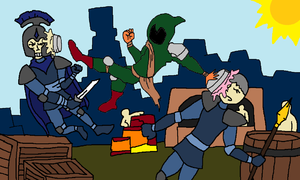 Spotted Pie Assassin in a city, fighting a few guards