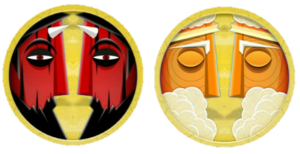 The Personality defines your hero’s behavior and abilities and has an impact on your hero's activities too.

Normally, heroes tend to be neutral. However, under the god's influence, the hero/heroine’s personality will start to change. Encouragement makes them kinder, and contrarily, Punishment makes them evil and angry. A lack of influence (no encouragement or punishment) will cause your hero to go back towards a neutral personality.

Below is the personality ranking system:

Please note: The average personality of the members of a Guild is called its Alignment for which there is a different but equivalent ranking system.

A God or Goddess can affect their hero or heroine's personality with only three actions: encouragement, punishment, and activating a hammer of realignment artifact.

Miracles, god voices, or any other actions or artifacts have no impact on a hero's personality at all. Encouraging and punishing in any situation affects personality exactly the same amount, including during any adventure or battle.

It will take approximately 30 accumulator charges[1] and all the encouragement or punishment influences associated with each of those in order for your hero to progress from neutral to pure good or pure evil, but the actual number of influences it takes to get them to the “extreme” levels of personality (marked with an “!”) is unknown.

Somewhere between the glory of being good and the thrill of being evil is the neutral alignment.

All heroes start out here, and will end up here without any influence. Heroes or heroines who stay with a neutral alignment basically just can't make up their minds whether they are good or evil and are generally thought throughout Godville to be heroes who want to have their cake and eat it too!

The neutral hero is unpredictable in the arena, as they may use attack strategies similar to their current frame of mind. One main advantage to keeping your hero at a neutral alignment would be that your opponent would not know for sure what your strategy might be, nor whether or not you are actively influencing your hero.

A Gentle personality is a sign that your hero is becoming more affiliated with the side of Good, as opposed to the side of Evil.

It usually takes at least 5 "Encourage" clicks to change a hero's personality type from Neutral to Gentle. Every time you Punish your hero, it voids out one of the Encourages, and you will have to encourage again to get to where you were before you Punished.

Just because the hero has a Gentle personality does not mean that their actions will reflect this in any way. Your hero still fights just as fiercely, the way that they treat other people and heroes or heroines is not affected, and the entries in the diary will not be affected.

Kind is the Second of the Six ranks of Good.

Kind can be seen as a nicer version of Gentle, but does not go as far as Righteous. When we look at the typical benefits that incur from being kind, you find that it provides a slight increase in healing ability but does not change anything substantial when it comes to things like fights with players or monsters.

Kind, two ranks removed from Neutral, is the most common alignment found for the Heroes of Godville.

Righteous is an attribute of your hero if you have encouraged your hero enough.

Continuing to encourage him/her, your hero will move on to virtuous, pure good, and then ultimately pure good!. You may reach a position on the pantheon of creation once you reach a high enough point in righteousness, which also gives increased health regeneration.

This is the status of a hero or heroine's personality, which comes immediately before rising to the rank of Pure Good.

This is generally the level where a hero or heroine can stop inflating and adding to gossip about themselves in the local tavern, and let their own virtue be self-evident to ordinary townsfolk.

A state of goodness directly above Virtuous, and right below Pure good!

They become excruciatingly cheesy (or maybe happy is the right word) and just blow their money going to vegan pubs that don't serve beer or on veterinarian check-ups, almost all of it. Go figure.

How many encouragements does it take to get to pure good? Count how many licks it takes to get to the center of a Tootsie pop and add two more.

Also, they are hated because of their love and purity and their tendency to give away their position at night because of their halo glowing in the dark. However, they do heal faster in the field. This competition is fierce, and is likely to continue for a long time as it is the nature of the pure good! to remain calm during battle.

They seem to flow like water, which helps in the healing process. A very special trait indeed. It takes a strong-minded hero to possess a pure good! heart.

It is important to note that it takes ongoing influence on your part for your hero to maintain this personality. Symptoms include:

Spiteful is the first step towards having an evil hero.

It takes about 5-6 "Punish" clicks to get a spiteful hero. To maintain a spiteful personality for your hero, you must punish more than you encourage, or you could easily push the hero back to neutral.

When a hero's personality becomes "Wicked", the hero has begun to turn their resentment from the constant punishment they receive back onto the world around them.

Cruel is the Third of the Six Ranks of Evil and Anger.

This alignment is attained through the punishment power of gods and is known for its ability to cause stronger attacks in battles.

There is speculation about whether 'stronger attacks' refers to the Hero's ability to hit or the God's ability to punish but there is proof, in Godville's code, pointing to the fact that both of these are affected.

This personality is after the Cruel stage.

The heroes inflict more damage as they become even closer to pure evil. If your hero is Vicious, they do tend to get fried by lightning pretty often. Vicious heroes like to steal from the dead, whilst showing no mercy to anyone who gives them a wrong look in the eye.

This stage is pretty hard to maintain (at first, even impossible without using charges, but it seems to get easier with time). Your hero will tend to go back down to cruel without ongoing punishment influence.

Only the most vindictive and hateful heroes make it to the "Pure evil" personality.

If your hero has a notorious tendency to stomp on small furry animals, beat enemies to a pulp, get struck by lightning on a regular basis, and basically hate the world.... you have successfully created a Pure Evil hero.

Only the most diabolical heroes even contemplate a personality that is labeled as Pure Evil!

It takes much effort, and ongoing punishment influence, but it can be very rewarding. Attack power is dramatically increased, and there are some fun diary phrases available only to those chosen few who achieve this personality trait.

However, these heroes do heal slower in the field due to large amounts of scar tissue. They continually insult those who are pure good! because they are far weaker in terms of attack power.

Due to the envy they feel when thinking about their good counterparts, heroes that reach this depth of evil may awaken the following characteristics: