Oreo Crush is a flavour of bubbletea, a beverage popular among youths, found in Southeast Asia. As the name suggests, it contains a mix of the crust of oreo biscuits as well as certain sugars, syrups and crushed ice. Optionally you would ask for chewy pearls. After which you suck everything up with a wide straw. I don't have a particular liking for its taste, but a close friend does; this came about when I wanted to think of a food as my username. Hence, the goddess OreoCrush.

The heroine's name was randomly thought of.

OreoCrush, the goddess, looked upon the land. 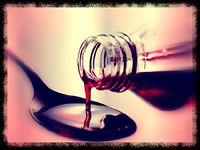 A rare sample of the fluid.

Evil was prevalent. A plastic wineglass, life-sized, was hidden unknown and non-biodegradeable in the mountains of godville while monsters rampaged in the plains. People were too weak and thin to fight back. It wasn’t an era of suffering. It was the era of dieting. Something must be done.

As the mighty OreoCrush waved her pearly white wand – of candy – a great mist engulfed the innards of the plastic container. The sugar settled; the translucent walls were now coated with a centimetre of crushed ice. The plastic floor was, in contrast, smothered in freshly baked oreo crust. Yes, oreo indeed. Black against white. Quickly the atmosphere cleared, the currents circling and slowing. All became quiet.

Then, when the last crystals of sugar skimmed the hard centre of the earth, the land moved. Where they touched, a jet of flowing, red syrup ensued. The ash-tinted ground shifted beneath, methodically sifting and tiling and forming a wide, circular depression; the syrup gushed in. Crushed ice propogated from the walls and formed a powdery white bridge over the pool of crimson fluid.

Without a sound, a dripping human hand emerged from the centre of the pool. It was of a light brown, with clear skin taut over feminine fingers, attached to a small wrist.

It took hold of the ice bridge and heaved the rest of our heroine into existence. The viscous liquid flowed over her naked body, and abruptly hardened, creating a clothing so vibrantly red it flushed her skin. The fingers left the bridge, now, but they were permanently marked with an icy white, snowy-textured tattoo outlined in oreo black, extending down to the wrist.

Her senses awakened, our heroine straightened her back and pondered her surroundings. What was this place? Ah, the bleak winter sky formed the ceiling above the container, and told of a world beyond, waiting to be discovered. Apprehension surged through her veins – as if responding to her feelings, the syrup beneath her began to swirl and bubble. She dipped her hands into the liquid for comfort, comfort from the only other moving being in her immediate surroundings.

When she withdrew her hands, they were clutching on to a palm-sized diary. She was thrilled she had a companion, one which she would share her thoughts and experiences with. But besides this, was she truly alone? What point was there in writing them if her existence was pointless?

The heroine gazed up from the cradle of her birth, and a voice cut through the cold air.

“Rise from the waters, my young heroine. You aren’t alone. Quest and conquer, in the name of your Lady, OreoCrush!”

Now, she had something to write.

This world is insane.

A three headed beast struck me when I climbed out of my shell. A strange sensation shot through my arm – I suppose that’s pain – and I realized my blood was pouring out of me for the first time. Before I could bleed further, though, I was lifted up into the air and warmed with the breath of a goddess.

Apparently, my Lady noticed. I swear I did hear a soft “Oh..?” above me. And then I was suddenly blinded by an ill rage which took my senses but when it was gone, the monster was simply lying there – in pieces!

It’s been a while since I left the carcass and I found a safe spot to write this. Strangely, the moment I left my birthplace, the wineglass, it toppled to the ground and turned the color of the soil. Apparently it’s biodegradable now that I’m gone. Does that mean I’m the one that prevented it from being decomposed?

I’m upset. In an alternate universe, people would hate me for polluting the soil…

10:53 Finally found the right path. Yeah, I’m quite sure about it. I’m with civilization now. I feel weird. People are staring. Still, how do you feel cosy about a place when you’ve only existed half a day?

‘Godville’, they say? This is the place where I begin.

Oh, curse those stares.. A hero’s tavern up ahead seems friendlier, albeit slightly sexist. I shall go, and take a look.

Nope, the stench. Anyway, the tavern’s full of buffed up heroes drinking, losing gold, then recording that event in their diaries.

The pages in this diary seem cheap, but the leather covering has a slightly divine aura around it. I think it’s older than the hills. It came with a pen, which I forgot to mention, and that’s how I’ve been writing. The red-faced merchant who peered over my shoulder said I have emotionless handwriting, though. Almost like the font of this typewriter he was developing. Sigh, I’d have preferred to call it tough.

I told him, he didn’t believe me. A lightning bolt from the sky struck him square on the back and I raided his pockets. Only my Lady’s opinion matters, and she agrees with me.

I’m headed for that first milestone.