Omnipotent Squash   appeared on 21st November 2013 following a series of events at the Harvest Moon guild hall. After the evil half of Brinjal's soul escaped, it searched for a body that it could inhabit. It could not choose just any body, it was restricted to ones that closely matched it's previous one. Eventually it came upon a butternut squash and flew into it, causing it to swell and grow to the height of a man, the resulting evil creature had godly powers and was now able to do whatever it chose, starting with killing every vegetarian it saw.

Azzageddi   and made to sign a contract both magically and legally binding. In these early days, Omnipotent Squash was known as Almighty Squash however he changed his name, since many gods already used "almighty" before their names. 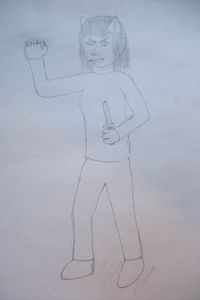