Divine entity who tries and often fails in her quest of raising her heroine, one DarcyLewis. Those who claimed that raising heroin is easy, clearly lied to her. When tried using stick and carrot method, Darcy insisted that forcing her to eat vegetables is too cruel. Parenthood is clearly not her thing.

In a bout of crazy optymism, Nobody tried to make additional pages of hero diary after her heroine died valiantly in battle *cough* drank herself to death *cought*, thus creating first and only Post-mortem Chronicles. Plot happens while DarcyLewis is dead & in Afterlife where she can meet Gods, Goddesses and other dead-at-the-moment heroes. She is often accompanied by her God and sadly departed first pet, Sven the talking donkey. 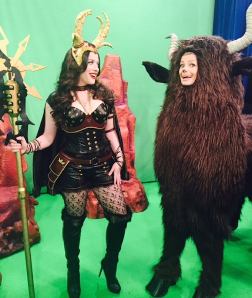 First meeting of DarcyLewis and brave Sven after Death

...are on account page. Sorry, too much punctuation to change.

She shook the Tropical snowglobe. Shiny glitter and tiny cacadoos were flying in the watery goo inside. Aztec shrine coated in blood shone in rays of little gold sun circling it.

'Are there tiny figurines inside?', asked Darcy looking over her god's shoulder.

'Ah, yes. There are. I wanted to improve your offering globe a bit. I like it.'

'Are they screaming?' Heroine squinted.

'Well, they might be a bit confused. I seized them from the entrance. And from your friend list, too.'

'There are my friends?! God, how can you be such cruel god!'

'I am aspiring to vicious now' NobodyIsPerfectButMe replied with satisfied smile.

'Take them out! Right now!'

'What? WHY? I just made it. I want to relish a bit in my new toy. Besides it's just a bunch of newbies there. And maybe one or two of your acquaintances.'

'They are clearly suffering!!'

'It's just tropical vacation! They will be glad afterwards that they have nice sunburns or whatever are you calling this golden hue of your skin!'

'Then let me rescue them!'

DarcyLewis woke up in a lush bush.

'Goddamnit', she said feeling quite fed up with her god. Heroine started to move through greenery. Parrots cried at her sight, it reminded Darcy of her god laughing at her.

'Goddamnher.' Darcy spend uncomfortable twenty minutes trying to find the center of the snowglobe, when invisible forcefield appeared in her way. Darcy smacked her head on the glass. She saw enormous blue eye gawking at her.

Oy, that's no way to talk to your god! she heard in her head. Eye moved away and Darcy saw distorted image of her god's face on the other side.

'Oh, wow, it's almost as good as this trick with face in the clouds!' Her god said nothing. Darcy stare some more.

What are you waiting for?

'Um... Some good advice for this quest? Blessing? Smite? Anything?'

You know where is border, turn around and go. Now move along!

'Ah, ok' Darcy was crestfallen that her god didn't even bother with the lightning. She felt very lonely at the moment. So Darcy tried to find the great pyramid. May I add, she has abysmal sense of direction so her hopes weren't high. Fortunately, she stumbled onto a tribe of newbies who, flexible as they were to sudden changes in their lifes, bound her with the rope to a spare spear like fresh meat for their next meal and carried her home. Home being great pyramid flushed with fresh blood.

At gore sight Darcy finally remembered about her steel finger skill and broke her hands free. Unfortunately she forgot to grab the spear and she end up hanging by her feet. Fortunately when the newbies heard her unholy scream of surprise they thought that she may be changing into some monster and fled for safety.

'Agh!' Darcy hit the ground painfully, looking after scurrying off heroes. Then she looked up. And up. And flopped back afted she saw a big stone building. She was at the foot of her destination.

Heroine bravely get up, forgetting bruises and bumped head. She was on a quest. She started climbing. It wasn't easy feat. Stone steps were about five feet high each and very slick. You would though that blood wouldn't reach that far down or be at least dried up but no. If Darcy thought this through, she would probably panic at the realization that most likely cause was the watery goo she was currently, unwillingly inhaling. Bleh.

At last, filthy and gasping for breath, Darcy reached the Last Step and top platform.

There, in front of entrance of the temple, was sacrificial altar. Some newbie cloaked in ceremonial clothes swung bone dagger and plunged it into the chest of his victim. The hero on the table screamed, his arms flailed briefly and he lost his balance. The self-proclaimed priest managed to grab his heart before hero tripped and fall down. When injured body rolled past Darcy, she heard fallen hero's cursing and complaining.

Darcy crept around top of the building on the platform, her heart thudding. It didn't want to part with her just yet. She hadn't let priest out of her sight, going to the door leading into pyramid, so she bumped into someone.

'What? Chris? Why are you just standing here!'

'I am waiting to be sacrificed.' He showed his disabled hands.

'Are you not worried that they are going to rip your heart off?'

Darcy and Christopher turned around, hearing the most vile curses imaginable. Before the priest stood Rinslett, who just stubbed his big toe on sacrificial table when two newbies tried to lay him down. He was hopping before amused priest, keeping one foot in his hands. Suddenly two more newbies helped flung him on the bloody rock and the high priest stabbed him then shove his hand inside. Darcy couldn't take it anymore.

'No! Leave him alone!' She jumped out of her hiding place from behind Christopher.

'Darcy?' Asked confused priest and took mask off his face to see better.

'WhyIsItAlwaysMe? What are you doing here?'

'Em... Ok, but promise to not be mad... Your goddess kinda give me free vacation here.'

'But you are ripping off Rinsletts heart!'

'But this is the best part... I mean, I'm sorry! I didn't know that it is your friend!' WhyIsItAlwaysMe tried shoving heart back inside. It didn't fit. Rinslett wheezed resentfully and tried to rip his hairs off. Or head, it was hard to tell.

Aztec priest/sheepish hero backed a little and showed guards to do the same. Rinslett stood up. His heart flopped sadly to the floor.

'Why are you even ripping hearts? I through you neutral, Why!'

'After this, you will be. Believe me', Christopher added, picking up the heart and throwing it back at Rinslett. He catched it, insulted.

'Don't think so. We are already dead. My personality won't change here.'

'I know' Why grinned.

'You know, he may have potential', Christopher pointed out, ruffling his hair. He smeared it a bit with Rinslett blood. Not that this bit made a difference with all floor flooded in red. Darcy felt that her boots were drenched and squicked under her feet.

'So, what can we do now?' Darcy examined Why's colorfull bonnet.

'You can go inside', Why proposed, indicating the only door.

'Why? What is inside?' Somehow listening to advice from a guy who just ripped out another hero guts seemed a bit... off.

'Oh, just Mystery Labirynth. We sent there heroes with bad affiliation, to check them out. So your friend over there would be put there.'

'Wouldn't you sacrifice him too? Like the rest?' Rinslett asked, pointing to the stairs, where the railing was violently broken by fleeing, heartless heroes.

'Nah, too much problems with that...' Why put his mask back on.

'Aren't you going with us?' Darcy ask worriedly. Yeah, definitely the idea was off.

'No. Not now. Sorry, sis. Maybe later. Now, I have too much fun here. Guys, get this goodie two-shoes here!' He yelled to his henchmen who dragged another struggling victim - the only one of offerings who didn't manage to escape while they were talking.

'Are we gonna do this?' Asked Darcy while Rinslett cut Christopher binds off.

'You have my phlegm thrower' declared Rinslett.

'And my osmium hammer' added Christopher.

'That's good because I've got only boomstick as a weapon' admitted Darcy. tbc... 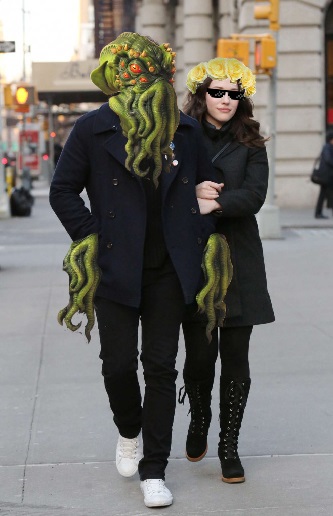