The Music Pirate (Pirata in musicam) is a virtuoso monster.

Is musket an instrument?

This pirates have been blessed with musical abilities, be it on the vocal or metallic strings. They give music a new martial dimension. On the hands of this buccaneers, any musical instrument becomes a war instrument. Thus (answering the question) a musket is an instrument.

Scimitars, flintlocks and even daggers are also potentially melodious when a Music Pirate steps up to the deck. Heroes usually fail to find words to describe the marvelous fighting style of this scoundrels.

From bard to bandit

In the beginning, this artistic killing machines were just a troupe of bards that traveled Godville from tavern to tavern. The law didn't especially like them but tolerated their gigs because they meant less criminals in the morning.

It all changed when one of this sailors stole a song from the dwarvish band "Burning Beards". This little dip in real piracy brought them a heap of trouble with the law, the Godville newspaper itself called this folks "the pirates of the 7 strings"; being treated as monsters, the Music Pirates began to act as such. No sailor was safe from their marvelous creations, ships that worked as giant orchestras swam the seas of Godville.

But nothing lasts forever, and soon this vessels started to rust. Downtrodden and beaten, the pirates now live (for lack of a better fate) full of bitterness, awaiting for a new captain to lead them into the biggest tour the world has ever seen. For now they just struggle to keep existing. 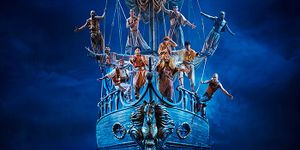 Music Pirates are skillful instrument makers, known to be the most dangerous kind of corsair that ever sailed. Their weapons are manufactured with the uttermost care.

An organ made of cannons? A musket merged with a guitar? A cutlass that can be played as a flute? Nothing is impossible for a Music Pirate, if it's deadly it must be melodic, or else... Their contraptions are famous and rare. Traders covet their inventions and many will hide them deep in their storages so they can keep them forever.