Monmon the Fast was called to duty by the power of the amazing, incredible (and humble) goddess Waaurufu. With her completely useful (or so we are told) powers and Monmon’s ability to run away in the face of danger, this land will know of no better duo between awkward deity and fictional oddly colored hedgehog.

Monmon the Fast was once a Supersonic Hedgehog, but seeing his race devolve into monsters caused Monmon to heed the call of a deity and step up to the mantle of hero. Being much shorter than most heroes can be a challenge, but Monmon's speed more than makes up for the deficit... until his "friends" jump in the way of godly encouragements meant for him. Rude!

Early on in his adventures, Monmon embarked on a special (and by special we mean stupid) quest that lead him to the lair of a Wherewolf. Though he was able to defeat the creature and take his valuable loot that was not the end of the story, as Monmon was bitten by the creature. Ever since that fateful fight, full moons have been a confusing blur to him. Though to be fair most nights are a blur after ten rounds of ale at the nearest town ...Where IS the nearest town? 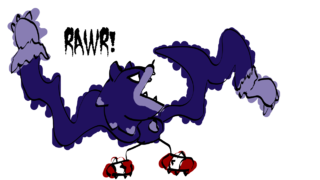