The Master of Puppies is a monster who is followed by enormous pack of dogs, from three to twelve. There are rumors of masters acquiring even to 13 puppies but it seems to affect monsters luck quite badly ending in gruesome death. Some say that elusive God of Monsters cursed him because cute fluffy puppies were destroying monsters bad reputation.

This monster comes in two variations.

This one is master to a pack of magical demonic hounds which feeds on hero's liver (so they are always hungry since it's a part of hero which disintegrates fastest). Evil Master is never seen without a new puppy in his hand which he often pets evilly and trains for his evil army. Drunk heroes tend to avoid him as his pack howls unbearably loudly and sober heroes usually have time to climb up the nearest tree.

who loves puppies and want to have them just for the sake of having them. All of them. From everywhere. Who not submit and give him a puppy should prepare for painful death. And when his puppies grow up and become big dogs then, well more chances for new puppies for him. 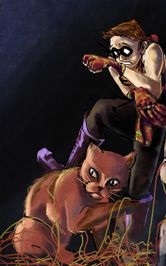 Master of Puppies horrified at the sight of a cat 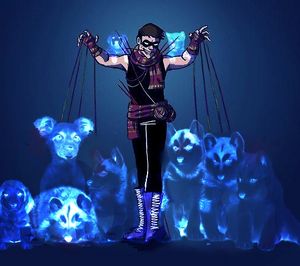 Master of Puppies with his cute evil hounds
Retrieved from "https://wiki.godvillegame.com/index.php?title=Master_of_Puppies&oldid=118703"
Category: