The Lego Golem is roughly human in shape, around twenty feet tall, and made of Lego bricks animated by a mysterious force.

Lego Golems not being any better at maths than their long-forgotten creator, they may have built each other with more than the usual number of limbs, or chosen to add extras to themselves later. The bricks are an insanity-inducing mixture of black, red, yellow, blue and white. Although rare, a Lego Golem may add certain parts depending on its intelligence and creativity, such as horns or a tail. They can also be seen wielding weapons and armor fashioned out of Lego, most commonly a sword.

Plight of a Professor

Although greatly desiring a child, Professor Creo van Finklemas was at an impasse, having been banned from all graveyards, hospital morgues and medical schools in Godville for numerous counts of vandalism, attempted theft and unseemly leering.

Mad scientists of all three genders are unable to reproduce in a normal manner: instead they must build their offspring themselves from whatever parts are available. Thus, the despairing and multiple-restraining-ordered Professor van Finklemas cursed the names of the gods who had denied her the gift of children.

The Materials At Hand

In vain the Professor had been collecting wonderful toys and sweets for her future hand-made offspring. It was to these unused presents that she now turned: specifically, to a huge barrel of plastic toy bricks.

After much trial and error, and an unproductive period in which she constructed a fort out of the bricks and sat inside declaring herself Grand Marshal of the Fairies, Professor van Finklemas at last managed to construct a twenty-foot-tall Lego figure with almost exactly the right number of arms and legs. The next question was how to bring it to life.

Lifting her construction into the middle of a thunderstorm by use of pulleys failed to have any noticeable effect, plastic not being a good electrical conductor. The Professor became disheartened and retreated to the fort for another week. Following this, she crept into the only museum that hadn't banned her outright and stole the legendary cubical artifact known as the Everyglint, which was rumoured to give life to anything constructed out of more than thirty-three separate parts.

The Professor prayed to the gods for guidance on how to use the cube, and when that failed, pressed the @-shaped button on the side. Her creation came to life and it was then that Professor van Finklemas realised the hideous monster she had made. The different coloured bricks were haphazardly arranged and, having run out of white blocks along one leg, she had used red ones and a bunch of pencils kept in place with sticky tape. The horror!

No longer able to look at her hapless child, which stumbled after her in vain crying "Dada!", the Professor abandoned her home and moved to Los Demonos, living as a haunted soul for the rest of her days.

The rejected Lego Golem, alone in an uncaring world, grew bitter and twisted. He tore down the fort, scattering the fairies, and used its bricks to expand upon his creator's design, first making himself a new leg and subsequently giving himself a proper head with eyes that faced forwards. This was an improvement.

Soon the Golem's thoughts turned to making himself a mate. 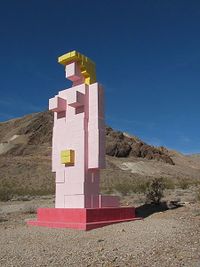 Together, they embarked on a plan to construct enough Lego children to people the world. Sadly, Lego being more expensive weight-for-weight than a gold brick, Lego Golems are still rare.