In a remote area of the Vector Field lies the Glitter Rift, a massive crack in the ground that vomits out infinite amounts of sparkly glitter. The rift was guarded by a spirit of nature known in an ancient dialect as the great "Keleios." One fateful day, an arts and craft store discovered the rift and entered into an agreement with the rift spirit to spread glitteriness around the world.

The deal worked well for both parties for a while. Keleios was happy to spread glitter just so min as the store stuck to a quota and the store was glad to get free materials. But as the arts and crafts stores expanded, the owner realized that the rift spirit had little power and began to harvest over its permitted limit. Keleios became suspicious and possessed a stray cat in order to spy on the store owner. Seeing the extent of the over-harvesting, Keleios became enraged, and her anger began to condense into god power. Eventually, the rage overflowed and a tidal wave of glitter burst out from the rift, engulfing the arts and craft stores as well as a few nearby hamlets, smashing them to pieces.

The lone survivor of the incident was a young woman from one of the destroyed hamlets. Keleios saw this as an opportunity to find a new way, less risky, to spread her glitter to the world. Keleios, still in the form of the cat, she trained the young woman to defeat monsters, gain fame, and channel the power of glitter in her name. 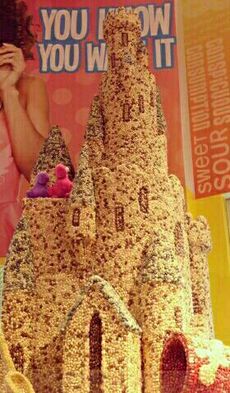 Keleios, while watching over her new hero, noted how other dieties had their heroes construct temples of gold to attract followers in order to increase their influence and power. Keleios ordered her hero to begin work immediately. However, being a cat, she grew bored of gold. Gold is so boring and pointless, she bemused. The temple, however was near completion and she did not want to let all of the work go to waste. What could she do now?

What's fun? she thought. Popcorn is fun. And smells good. She used all of her bricks as a payment to buy all the popcorn kernels in Godville and the surrounding cities. She commissioned her hero, along with several significantly more competent construction workers, to painstakingly pop, arrange, and glue each kernel of corn. The process was backbreaking and enfuriating, and the workers worked for weeks before any serious progress was made.

About this time in Godville history, the Great Monster Famine of g.e. 1020 was occurring. Hungry monsters began to raid Godville in search of food. A particularly large horde was drawn by the tantalizing scent of Keleios' popcorn castle. When the leader of the pack began to eat from the castle, Keleios became enraged beyond any description. An inundation of glitter like was never before seen poured from the top of the castle that day. There was so much glitter, it could not all be swept away and today the pools act as moat and only a drawbridge crosses it safely. The people of Godville were very grateful for the defeat of so many of the town's raiders and then mayor Irwin built her a sparkly box in commemoration of the "Battle of Glitter Creek."

Over the years, Keleios and her hero have met many powerful, and many not so powerful allies. These are a few of the noteable ones.

At one time, one of the greatest masterminds of the Godville, able to survive any opponent simply by curling up into a ball. He is two parts pangolin, one part porqupine, and one part turtle, and made of solid gold. His life turned upside down the day he tried to prank Keleios. Assuming her to be a kind, playful, and nonterritorial feline, he decided to hide in he glittery box and jump out when she left the room. However, her acute senses detected the golden porqutortolin, who admittedly rarely bathes, and locked him inside the glittery box. Some believe he still lives there today, and the hero seen wandering the streets is only a robot being controlled from inside the box.