The Godville Serpent watches over us all. 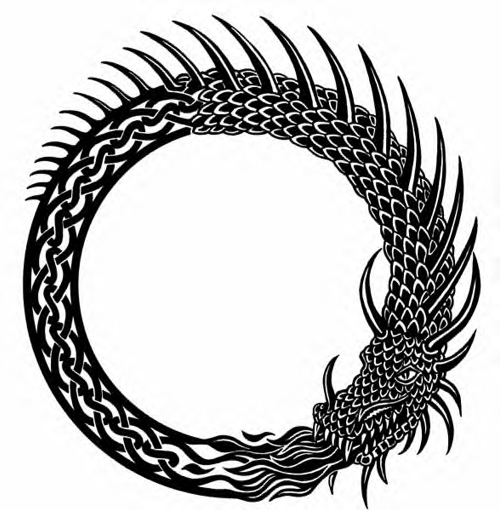 In Godville mythology, Jörmungand, or World Serpent, is a sea serpent. It is the middle child of the giantess Angrboða and Loki. According to the Godville Edda, Wodin took Loki's three children by Angrboða, (the wolf Fenrir, the goddess Hel, and the serpent Jörmungand) and tossed Jörmungand into the great ocean that encircles Godville. The serpent grew so large that it was able to surround the earth and grasp its own tail. Upon grasping its own tail, it noticed that it tasted a bit like maple syrup, sometimes a bit like mead, and other times like cheap booze. Thus it refused to let go of itself. As a result, it received the name of the Godville Serpent or World Serpent. When it lets go of its tail, the world will end in Ragnarok, the final battle. This is mostly viewed as a bad thing, so our guild tries to acquire as much maple syrup, mead, and cheap booze as possible and get it to reach the oceans surrounding Godville.

Our priests are wise above all and encourage us to placate the Godville serpent by whatever means possible. Hence, we quest for the goods Jörmundgand craves. That the guild-members "borrow" most of said maple syrup, mead, and booze before it reaches the sea is seen as of little consequence. And some of us acquire quite a taste for it too. That's why all of our senior members acquire the aspect of the great snake we worship and are known as Hugh Serpents.

"Quality over quantity... or is it quantity over quality? I dunno. It'll get there somehow, and it'll probably be fine."

The holy fable of Hugh, the first of his name:

It is a mighty tale, indeed. How the mighty serpent named Hugh got high, lost his car keys, wandered around an industrial section of town at 3am, and had an existential epiphany about the nature of life, time, himself, and Godville... "It's all quite mad, innit?" he said to a random bum. Rae had sold him the weed. "Oh you think you are Hugh. Everyone thinks you will be Hugh in the future. But I'll make you high! Bwaahaha!" Then there were cookies and snacks. Afterwards there was sinking into soft couches and being generally useless for the day, and the entire town rejoiced! Or would have done had not Rae got to them first with her promises of cookies and snacks. As it was, everyone was too full to care too much about anything at all and napped for the afternoon instead. Thus concludes the saga of Hugh, the first High Serpent. Or "highserpent" for short.

And so we give thanks to Hugh the highserpent, and Rae for making it all possible.