A long time ago a man known as "Nocens Filiolus" who went to an open field in the forest and called his God an incompetent nitwit, then he decided to knock it up a notch and called all Gods losers, then he knocked it up another notch and said that without Gods, life would actually be bearable, then he took it up another notch and said that instead of a temple, he was going to build a giant toilet from the Golden Bricks, that last one really pissed off the Gods, they declared Nocens a Heretic, cursed him and demonized his looks, this only pleased Nocens, he used the bricks he had to construct a church of his own, 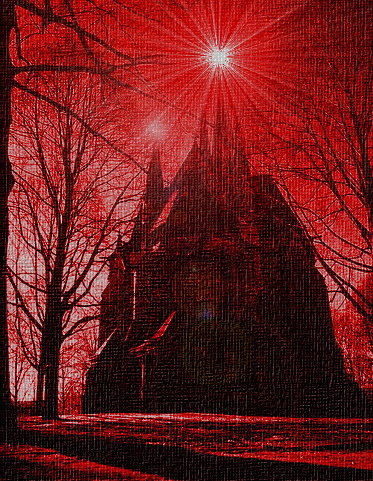 In his church he collaborated with Mad Scientists as he wanted to appear as a Godlike creature to the first hero that would walk into his church, and so it happened, on a faithful day a heroine starting her first quest was lured by the appearance of the eerie church, she felt it, she had to go inside, inside a man in a cloak hiding his face asked the Heroine for her name, when she answered, the man took the great book lying a pedestal on the far end of the church and showed her a passage, that cited her as being the chosen one to come and redeem the lands of evil and false Gods, to make man decide his own faith, that it was her destiny to do this God's bidding, a few special effects later the Heroine was convinced even though what the cloaked man just described was full of hypocrisy, she was then baptized by the cloaked man under the name "Angel Lilith" and took off with confidence, the other Gods felt this one, and they weren't very happy about it, most of them got bad stomach aches, and a couple of Gods developed kidney stones and those are really painful and unpleasant, they first decided to break down the 'false' Church but that would be too much work, and it would leave a lot of paperwork to fill out, so they just cursed the Heretic again and this time they named him the "Heresiarch" and the enemy of all Gods and heroes, after this, many heroes have attempted to destroy the church, but the other Gods were so angry at the Heresiarch they changed his Golden church into a Granite Church, hitting it with their weapons didn't do much good.