The Headless Chicken is a monster in Godville that can be encountered on randomly, usually unexpected. Given that these creatures are indeed headless, evolutionary line made this prominent predator have observably powerful 6th sense. Since they gauge the fighting capabilities of an enemy from the intensity of their auras, headless chickens tend to think most heroes as other similarly sized, predators.

Despite being chickens, these reptiles have immense fighting capabilities. They stand at around two to three feet in height, and about four to five feet in full wingspan. 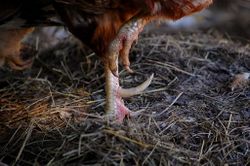 It has been documented that their spurs are known to be at least an inch in length when newly hatched. And the spurs are tougher than their bones despite being newborns. Upon reaching adulthood the spurs grow about six inches in length, hardened, toughened, and are very sharp.

Here is a diary entry of a hero who documented about the headless chicken spur, and even made a knife out of it.

01:07 PM: I can see a beheaded chicken laying on the side of the road a couple of steps away from me.

01:08 PM: Jackpot. Dinner for tonight is already secured. Now if only I have beer with it.

01:09 PM: Turns out it's a Headless Chicken sleeping. Then a fight it is. For dinner!

01:26 PM: Got my dinner, err, finished the Headless Chicken.

01:28 PM: Upon closer inspection, it's spur that almost stabbed me earlier can be made into a knife. This shouldn't take a while to carve it off.

01:35 PM: Used some hard wood for the handle. This makeshift knife should come in handy.

01:44 PM: Met a wandering merchant. Traded the makeshift spur knife for a small keg of beer. Dinner will be great tonight!