Not to be confused with Haemoglobin (Hemoglobin), the iron-containing oxygen-transport metalloprotein in the red blood cells of all vertebrates (with the exception of the fish family Channichthyidae) as well as the tissues of some invertebrates.

Haemoglobin (ˈhiːməˌɡloʊbɪn) is the name of the Goddess in the legend of Biliverdinn. She is believed to be an imaginary deity who Biliverdinn created on his mind to explain all the good[4] and bad[5] things that ever happened throughout the time he was travelling across Godville. The hero also mentioned in his diary that Haemoglobin had been the only one who was always there to guide him the right ways to go [6] and tell him the right things to do[7] in the worst times of his life.

How the world sees Haemoglobin through the words of her hero

This is the top reason why no one else besides Biliverdinn actually believes in her. On some days she could bless him with all the best things ever happened in this world, but in the other days she could just trike him crazily with her lightning; or worse – she might do nothing in an entire day and make the hero thought he was abandoned. Which sounds pretty the same as how luck works to all of us. 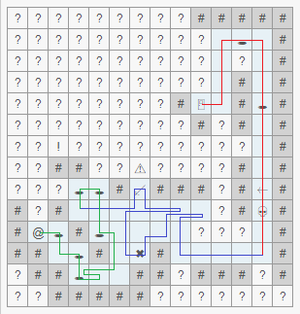 A map shows the team’s route inside a small and easy dungeon. The red lines show their route when Haemoglobin hadn’t lead the team yet, while the blue and green lines show how she had messed things up

As being mentioned above, Biliverdinn claimed that he was guided by his Goddess in dungeons, but how bad Biliverdinn’s performances were is not a secret. In his time, children of Godville even had this folk song about him:
Row, row, row your boat
Gently down the stream
Don’t be like Biliverdinn
Read “Dungeons” before going in
( “Billy’s such a dummy” , unknown author.)


The terribly-high average number of steps Biliverdinn had to make before being able to get out of a dungeon is very concerning. This has been explained by other people who went on a team with him: despite having gone into dungeons many times, he seemed to know nothing about them; and he always claimed to hear his Goddess’ voice which told him the way to go. Biliverdinn had no other choice but to warn his teammates about this and apologize when “the Goddess had made serious mistakes” . He also admitted that “Haemoglobin’s” navigation skill couldn’t get any better in time, but “she knew her weakness and only tried to guide her hero when no one else did the job”.

Because of this, historians are still arguing on whether Biliverdinn was making excuses or he was just drunk. Some other historians also believe that this whole story is just made-up, in order to teach the children a lesson about the importance of the knowledge written in the wiki pages of Godville.

The only thing kept him away from being kicked out of the dungeons is that he was very lucky in battles against the bosses, or “My Goddess showed no mercy to those beast!” , like the way he had always said about her.

The reason why Biliverdinn could hear Haemoglobin’s voices can be seen in the chart below. This chart was created by a tavern owner of the Molotov's Cocktail Bar, which shows the total amount of gold Biliverdinn spent on her tavern and the number of Godvoices he claimed to hear on a day in 30 days: 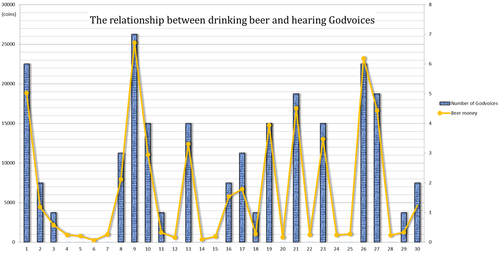 Biliverdinn himself explained that his Goddess didn’t happy to see him drinking too much, while others think it depends on whether he was drunk enough to imagine things or not.

From the chart, we can also see that Haemoglobin was a deity who didn’t talk much; most of the time, she only used simple words to demand her hero to do something:

The reasons why Haemoglobin barely sent any Godvoice a day could be:

When Haemoglobin felt excited, she could send him a fully-constructed message; but it was rare:

!Hero's Diary↻
07:28 A voice too high in pitch for humans to hear said, “I'm running out of charges... Guess what? You won't have to go dungeon today!” At least, I'm guessing that's what happened.

In Biliverdinn’s diary, historians notice some parts where Haemoglobin told him some new things are about to appear - from simple stuff like how his quests would end, what was going to happen while he was travelling, to the name of new quests, the discovers of new monster species, the inventions of new artifacts,.. When some of them became true, Biliverdinn insisted that they were all his Goddess’ creations; but scientists believe that he somehow knew about secret science projects which were still in progress and used the information he had to make people believe about Haemoglobin’s existence and her power of creation.

More importantly, most of the things Biliverdinn said never came true, so no one took his words seriously.

Her role in Biliverdinn’s hero life

Like being said before, Haemoglobin was the one who accompanied with Biliverdinn through his darkest times. This statement could lead to two conclusions:

As written in Biliverdinn’s chronicle, the deity used to be absence for a while[8]. Legends say that during this period of time, Biliverdinn was almost idle as no one had ever heard anything about him. Arena and dungeon records also showed that he didn’t go to any of these places; the Association of Quest Givers confirmed that he still occasionally accepted new quests, but it took him a much longer time to finish them. It was only until Haemoglobin came back, the hero became more active like he used to be, and started spreading words about his Goddess again.

Either way, there is no denial that without Haemoglobin, Biliverdinn would never become the great hero in the legend we have today.

Some useless stuff which could be written by Haemoglobin

How to be a cool deity

“If you are reading these lines, you must be so desperate that you have no other choice rather than seeking for an advice from me, a failed Goddess who’s too lazy to play a zero-player game properly.

Well, this page is not a place for you to get information about arena or dungeon or kind of stuff like that. I would recommend you to search for other deities out there who have enough knowledge about the game. Reading some pages in Godwiki does help, too. I’m willing to help new deities, but my answers may not be able to help you much, especially if you are a competitive deity who’s serious in playing this game.

My only advice is that you should stay connected with your hero or heroine rather than treating them as a game character. That would make your journey in the game more interesting.”