Fountain of Youth in Herolympus

The original Fountain of Youth is located in Herolympus in the northeast mountains. Despite the constant tales of hero's and adventurers dying for the substance, Its actually not a big deal in the land.

Natives in the region have actually learned to convert the beer (with the help of their god of course) into a non-fat chocolate beer.

The area surrounding the Fountain of Youth is said to be grey, dead, and inhabited by the spirits of dead heroes who went searching for it. The fountain is said to be 50,000 years old, but myths of it didn't begin until about 1500 years ago when nomads trekked up the winding mountains and crossed the black seas to the area. Numerous tales say the nomads drank from the beer-tasting waters and are still alive to this day.

Fountain of Youth in Godville 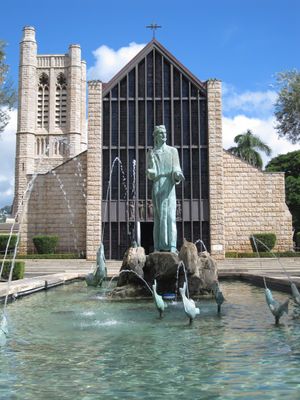 The Fountain of Youth in Godville. The wide area makes for an excellent place to take a bath.

Accordingly, the citizens of Godville are split as to whether the fountain actually has healing powers. Many who claim it does have healing powers also swear by the powers of the Soap of Premature Aging. Conversely, others say that the Fountain has no powers and the Soap of Premature Aging is just the same soap available for sale at Hero-Mart. A very few people who have been around a long time claim that the Fountain's properties are cancelled out by the Soap. However, no one believes them because it is believed by everyone else that these theories arose because the theorists needed an excuse for why they're old now when they were young and spry not 50 years ago.