Our Almighty and Starchy Potato first commanded a small group of heroes and heroines to always be the first on the battlefield. Then things got a little out of hand as more people began to join. And so a guild was formed (Once the proper paperwork was filled in triplicate, for tax purposes.). We deliver the first blow, the first kill, and chug the first beers at the tavern, all in the Potato's carby name!

Our guild is founded on the basic principles of being awesome, enjoying potato-derived foods and monster hunting. These principles are our legacy, that we teach to those who wish to join us. New members are often tasked with the subduing of the food we serve on Wednesdays. (We still can't work out why only the food on Wednesday wants to eat us. Cosmic rays? Extreme freshness? Government conspiracy?)

Now as we all know your Ludibrious heroes aren't exactly the brightest bulbs in the shop, so you really have to spell it out for them...

Now this isn't that hard and you can make them join by following this short guide:

1. Command upon them these words five: Join "First to Fight" guild

2. If thine hero hath brains of Magpies, repeat thine command outside of town. For there are fewer lustrous thingys.

3. If 2. did not help machinate for thine hero to be 'idling' (i.e. Not fighting monsters).

How not to leave

Every now and again our frankly quite stunningly dim heroes decide that it will be a good idea to leave the guild. So they get a new quest. For some reason they are fully cured of this insanity once they reach the rank of Cardinal, we still aren't sure why it is only at this rank this happens. Currently the leading theories among the guild helper monkey scientists is that by this rank the guild members have either ingested enough potatoes or are genuinely smarter and more sociable. Well we don't know...

Harken! For if ye, the divine entity wishes for thine hero to not do this follow these steps

3. If 2. hath failed repeat step 1 but thine command hath to be different.

Origins and the Potato Explained

The Potato is not something that can be explained, nor it can be understood by mortal men. The Potato just is. The first sightings of the Potato occurred in the early Cretaceous Period. Where it is believed that it hunted dinosaurs by burying itself in the ground, then ambushing unlucky ones that wаndered too close, by bursting out screaming at them. The Potato was so successful in these tactics that it caused a few extinction events, thus causing it to hibernate until prey became more available.

It was after one of these hibernations that the Potato realized that it could just get all of its sustenance from the soils around it. Eyewitness reports of this time, claim to have seen the Potato slamming what counted as a forehead against a wall for some time. After a few millennia sleeping off the subsequent headaches and realizing that its prey were defeated by a space rock, the potato wondered what it should do with its great starchy powers now.

The Potato spent some considerable time exchanging letters with its older cousin The Flying Spaghetti Monster. It was during this time that the FSM taught the Potato the joy of screwing with the heads of mortal beings. Thus the Potato became both a healthy source of starch and a hidden manipulator of the recently appeared heroes in the land.

An Example of our Starchy Benefactor in his most primal of forms. Pretty awesome right?

Rumors persist that we were founded by the knights of the circle table (no relation to the knights of the round table) that wanted a group of more than six knights. So one of them said "I'll go ask my god to build it for us!". All the knights cheered until the god said "Build it yourselves lazy bones!" These rumours were later debunked by the potato revealing itself to the guild during the great debate of '14. 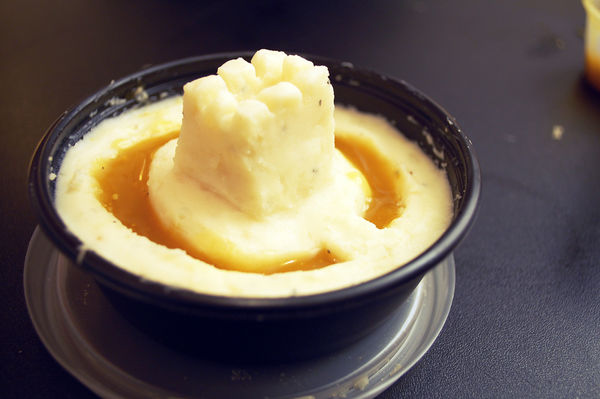 Our current headquarters, note the gravy moat where many a hero has drowned.

Our Leaders in the Campaign against the Election Committee

In the beginning there was chaos. When Election committee first struck the unprepared guild, Keeba13 descended from the skies upon a tiger made of divine lightning and sealed the election committee inside a prison of bone. After seeing her work done she dissipated into the ether, descending into the annals of guild legend. Years passed, and the election committee eventually broke from its bonds. The chaos and terror of its presence soon filled the world again. Within that chaos AdraBlint rose, fought against the tyranny of the election committee horde, seized Keeba13's position. Thus peace returned once more to the lands... Alas over two terms of great service AdraBlint stepped down, he was tired of the fight, spent. Wishing nought but the best for the guild, AdraBlint wished to wander the lands. He was not sad as he knew that the next great leader will rise and fight when Election committee rose anew. So the guild watched as the silhouette slowly shrunk in the horizon, as yet another leader went into the great beyond.

What will happen next none shall know...

An abridged list of leaders for yee too slothsome to read the holy annals...

BlueStapler   - The Makings of an empire...

Hirekawa   - The Legend of Potato: The last leader...