The Dollars is an online group. Anyone is allowed to join but only through invitations. Although the organization mainly exists online, several groups have taken the name dollars and used it for their own ends. As such, the dollars are regarded as a "Color gang without a color" and have garnered a rather fierce reputation around Godville.

The Dollars were originally created by Dog Head and a group of other internet friends as a joke. As the group began to expand exponentially, all of the original founders were frightened of it and deserted the project, except for Dog Head. As the gang became more popular, people began using their name in order to commit crimes and do wrong. Despite this, Dog Head suggested that members started doing good deeds around the city. While he was mocked at first, the idea resonated with a few others and more and more Dollars began to fix whatever the other members did. Invitations into The Dollars ceased for a while, as Dog Head decided to stop, but the gang continued to grow relentlessly as a result of Izaya Orihara continuing to send out invitations. Rumors began to spread about the Dollars, profiling them as one of the most mysterious and potentially dangerous gangs in the city.

The Dollars made their first public appearance in Godville when the leader, Dog Head sent out an e-mail with his cell phone to all the members, ordering them to only surround and stare at Namie and her workers. After this incident, rumors about the Dollars increased and the gang became even more famous. 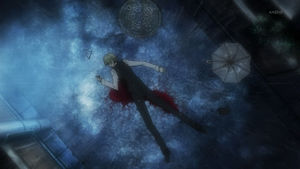 Shizuo shot by the Yellow Scarves.
The Dollars later heard news about a young Raira student named Anri Sonohara being pursued by Yellow Scarves members. The Dollars decided that they weren't going to sit back and let this happen. Members within the area began aiding Anri in any way they could. Shiri helped by leading her out the back of the Orb Ikebukuro Building. Kazutano made sure she got out the exit, closing the gate behind her. Ryo Takiguchi slowed down Horada, knocking a couple of boxes on him in a store. The Bunny Suited Man gave his costume to Anri in order for her to escape unseen. Simon Brezhnev intimidated pursuing Yellow Scarves. The same Raira student was caught again by Horada and the Yellow Scarves later that same night. This time it was Shizuo Heiwajima who unintentionally came to her rescue, attacking Horada on sight. The Yellow Scarves later attacked another Dollars member, the Bunny Suited Man that aided the Raira student earlier. This resulted in the Dollars leader, Dog Head disbanding the gang, stating "The Dollars will disappear." and closing the BBS on the main site. The members were apparently against this idea and called him irresponsible. The Yellow Scarves committed another attack on the Dollars late that night, this time shooting Shizuo with a firearm, one in the right leg and the other under his left under arm, leaving him laying in the street in the rain and stating that this was the order of Masaomi Kida. 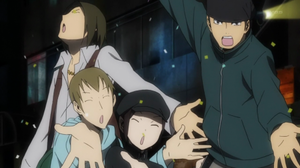 "We are... the Dollars!"
The Dollars gang allows anyone to join via invitation. The person is then given a password for the gang's main site online. Due to the gang's nature, being colorless and a care-free group, there are no ties between the members. No one knows who is a Dollar or not. There are no rules, no orders, no restrictions. The members are free to do what it is they please. The members do not know their leader and the leader does not know his/her members. This means at any time or any place, anyone could be a Dollars member.