When it became possible on 1689 g.e. to elect a leader, the Confessing Spammers didn't have the necessary five cardinals to do so yet.

They soon did, however, and as there was only one eligible member, PutInNameHere, he made it.

The next elections were held from 1924 g.e. to 1931 g.e. and again, though this time not due to any limits, there was only one contestant, K-Man. He won the election after a great speech.

As it had became tradition, only one person contested in the third election as well, and on 2066 g.e., Epithumia became the Confessing Spammers' first female leader.[1]

The one and only nominee of the fourth election, Muffindeity, leader of the B-team, happened to win said voting contest on 2201 g.e. and started his political career suggesting to build a wall to keep all the non-spammers outside.

Sadly there were times when the Guild struggled finding a good and wise new leader. It is told that in this time of uncertinity a fire destroyed big parts of the guild archive. The sections containing information about former leadership and elections between 2201 g.e. and 2925 g.e. were lost due to the fire. The historians of the guild did their best to recover as much lost data as possible.

More detailed information about the election has been lost while rebuilding the guild archives. It is however well known that Redleif is the guild leader who finally did set the Current High Level Rank to 'confessor' as it was his Term when the first Guild Members reached this Rank.

Again there had been only one nominee for this election. The God Okhuz did win the election on 2884 g.e and is the rightful Guild leader until 3004 g.e..

In the first nomination week sadly no one could be found to take over the lead from great God Okhuz . In the second week of nomination the god Notan, one of the currently oldest mebers of the guild, nominated himself to take the position as new guild leader. So it came that on 3026 g.e Notan became Guild leader until 3146 g.e.

Due to the fact that it had become tradition by now that each leader only is elected for one term and won't nominate themselves for a second time, there has been a struggle to find a new leader. Many of the younger guild members left the guild early. So soon there was nobody left willing to be elected. It stayed that way until about 3398 g.e, when JAFR decided to run for leadership. On 3411 the hopes of the Spammers got destroyed as it was discovered, that there where not enaugh active high level guild members willing to vote. "JAFR" lost this election round even as 50% of eligible voters chose him as leader. 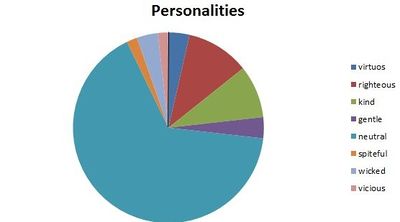 This statistic was created on 1692 g.e. and it clearly shows that the majority of our guild members is neutral. Where does this come from?
Many gods don't check up on their heroes eagerly. As heroes tend to become neutral[3], this is what happens. 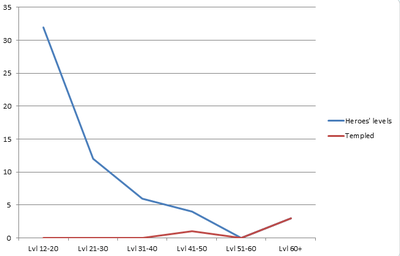 This diagram (also made on 1692 g.e.) is easy to interprete: The average level of our guild is 23.9, which is - I daresay - rather low. This, as well, is not very difficult to explain:
Many elder gods will stay in their guilds until the inevitable Heat Death of the Universe (they're gods, what else should they do?). They won't change their guild at all, some may have even founded it. So the ones to be recruited for a young guild are the young gods: They aren't sure yet whom to join and just test it out, maybe they go for the careerist-achievement. When they grow and - so to speak - become one of the elders, they mostly make the decision to stay in one guild - one day this might be us. Until then, we will have to wait. 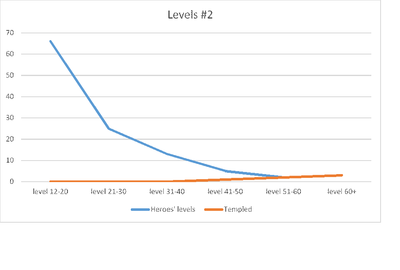 Surprising about this chart is the vast number of people in between the levels twelve and 20. This might be explainable by remembering[4] that we lost a lot of members recently, for some apparently unknown reasons, and are now gaining new members again. 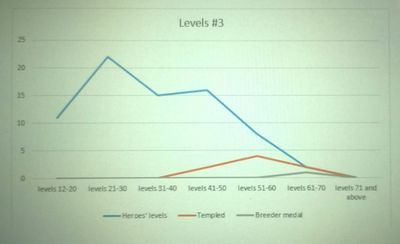 As one can see, the tides have turned. In contrary to the former level-based statistics, this one offers new peak positions, the absolute maximum at levels 21-30 (which isn't that surprising) and a relative one at 41-50. Also please note the persons levels in their 50s: They joined the guild when it was young and decided to stay here. These people usually are far beyond cardinal rank and usually don't leave "their" guild again.

Eventually, I would like to point out that all of our members levels 52 and above have a temple. So those of you, who don't yet and believe this day might never come: Don't worry, as the Beatles said: "All you need is love patience!" 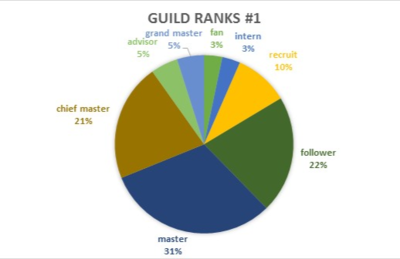 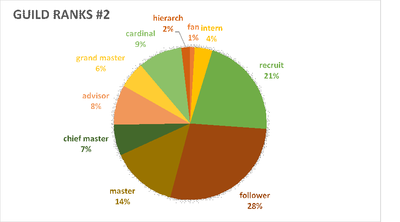 In contrary to the former chart, where recruits and followers were about a third of the number of members, they are about 50% today. As a fact, we depend even more on lower ranked members.

Nevertheless, we finally got cardinals and even two hierarchs, and together they are about eleven percent, allowing us to elect a leader. 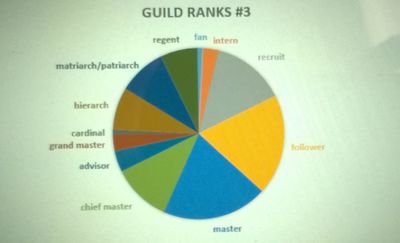 Whereas on 1831 g.e., recruits and followers were about 50%, now they only count as about 33%. Instead, ranks cardinal and above have increased and now represent about a quarter of the total members. Overall, as expected, the diversity of guild ranks has increased, and in fact, only the topmost two ranks are not yet represented among us.

When will I be able to raise my voice in the Guild Council?

As soon as you Reach the Rank of "recruit" you will able to speak up in the Council. (Has to be confirmed.)

Does my hero ever stop trying to leave my beloved Confessing Spammers Guild?

Yes. Once your hero reaches the rank of Grandmaster[7] he/she will stop randomly starting a "Become [Number]th menber of [Another Guild] ...." and stay in the guild. From this point heroes will only leave the guild on their gods cammand or being automatically expelled from guilds after 30 days of inactivity, regardless of their guild rank. If a god has set up a recovery email, ther will be sent a one time notification short before beeing expelled.[8]

How do I set up a proper profile?

As everywhere, you might like to look pretty good, very serious or just kind of special in the forums. You do this by changing your so called Gravatar. And this is how it works: