Caravan of Combustible Cynicals and Congressmans

Come, check the brakes of your Caravan, check your tyres and headlamps, and grease up the coupling head. Leave your relatives behind and never look back as we begin the Caravansary to the Perfect Camping Site!

The Caravan of Combustible Cynicals and Congressmans Guild is a guild for those whose heart is free like a bird, those who seeks freedom in the roads of the unknown. In this guild, enjoy the one-and-only feature of travelling with caravans and the ability to spontaneously combust into flames. Of course this has lead to countless damages around the Guild Hall, the Guild Campsite, the Guild Hospital, and the Guild Tavern. In fact the guild is eternally banned from visiting campsites with flammable materials nearby, such as forests, plains, meadows, and hills.

After the event, the guild's single purpose is to find the perfect Campsite, where we can sit around the campfire and spontaneously combust without a squadron of firefighters surrounding us.

So, what are you waiting for? Get your own caravan, type "Join Caravan of Combustible Cynicals and Congressmans Guild" and join us!

Our cause has begun long ago, even before the people knew the concept of caravans nor guilds. Back then, our combustible ancestors begun their journey to find the Perfect Camp Site on camels. 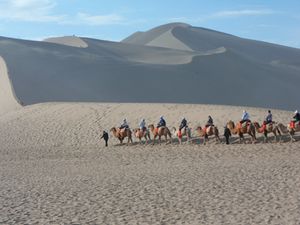 Our ancestors, starting their journey on camels

Fun Fact #1 : The true descendants of the Caravan of Combustible Cynicals and Congressmans are nonexistent due to our ancestors spontaneously combusts without leaving a child or two. Sometimes they spontaneously combust while sleeping under a sand pile and end up encasing themselves in a glass coffin.

Although they didn't find the Perfect Camp Site, their spirits pass on to the next generation, the Medieval Times. 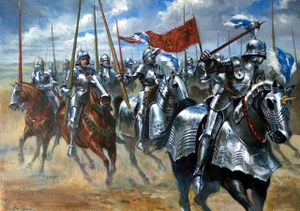 Fun Fact #2 : Not to be confused with the crusade, the Caravan of Combustible Cynicals and Congressmans doesn't involve themselves in the holy war. Although some of their act of combustivity are often described as a "Holy Calling" by the crusaders.

Still without a Perfect Camp Site, the remaining survivors of the pilgrimage pass on their spirits to the next generation, the Renaissance Era. 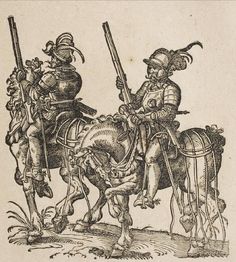 Depiction of several members of the caravansary during the renaissance

During this generation, the people have known the usage of gunpowders. During this age, a mass extinction of the caravan members severely crippled the movement. Some of the guild member's spontaneous combustion sets the gunpowder caravan which results in a huge explosion. With only several members left, the movement is nearing their end.

Fun Fact #3 : The idea of using gunpowder as explosives comes to the mind of the inventors after they accidentally saw a member of the Caravan of Combustible Cynicals and Congressmans guild spontaneously combust near a heap of gunpowder. They also have to recover for 2 months due to the explosion before starting to invent the explosives. 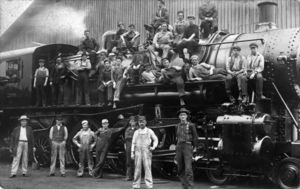 The whole family of the caravansary during the industrial age, utilizing trains instead of horses

During the Industrial Age, however, due to the technology of media broadcasting, the movement of Caravans of Combustible Cynicals and Congressmans recieved a lot a followers, and their members grew in size. Utilizing the trend of railroads, the guild uses trains to search for the Perfect Camp Site instead, causing major damages in several train-tracks and bankruptcy in several train companies.

Fun Fact #4 : Several train damages caused by the guild members are often perceived as a fault in the engines or an act of sabotage by rival train companies, leading to a revolution and the rapid growth of the train technology.

With the sudden wind of Archeology, the guild finds a depiction of their long lost brothers. 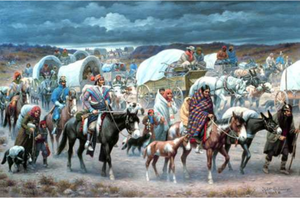 Depiction of a forgotten branch of the caravansary

A small flashback, during the Renaissance-Industrial transition era, the movement has split into several small movements due to the frequent explosions in the main caravansary. One of the sub-movements manages to convince a whole tribe to join the movement, which actually leads into the extinction of the tribe along with the sub-movement due to them spontaneously combust into flames.

The present generation caravansary, holding their annual gathering before going on another journey

Welcome to the present time! With the Guild established after some Congressmans decide to make a foundation of the movement, the Guild's Base now stands somewhere in the countryside, with a campsite in which the members hold the annual camping before searching for the Perfect Camp Site. Do note that the Guild Camp Site is basically a charred-wasteland devoid of life. 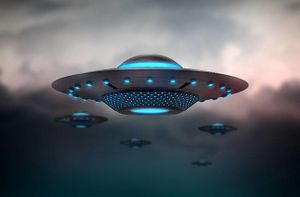 Depiction of the next generation caravansary, searching the Perfect Camp Site even to worlds unknown

Some members with scientific background have predicted the possibility of venturing out from this world to another in search for the Perfect Camp Site. Utilizing now foreign alien technologies, we might one day make the dream come true.

Members of the Caravan

The Guild Council is a place for the members of the Caravan of Combustible Cynicals and Congressmans to chat about relevant things in their life. Sometimes, random discussions about irrelevant things are also appreciated! You can start using the GC after reaching the rank of Recruit. Other uses of the Guild Council, as written below:

Using the Guild Council, members of the caravan can send their heroes to the dungeon together, having a small journey to find the next best thing than the Perfect Camp Site, treasure!

There is no other way to have fun than making small quizzes and games in the Guild Council. Come on down and join the fray!

Rules of the Guild Council!