Captain Oblivious is a monster whose biggest enemy is Captain Obvious.

Captain Oblivious is one of those dangerous enemies around the sea. He's known to be a brainwasher and feared by sailors. His crew are armed with the legendary weapon, Mace of amnesia and other weapons that make the victims forget about their identities. Captain Oblivious also uses this opportunity to recruit the victims into his crew. That's how he got the name "Oblivious", because those victims who have survived, won't know who had attacked them. Those who will not obey him are known to be left as a sharkbait in the Davy Jone's locker.

And like the other pirates, he's criminal and don't hold promises or deals, so never take a pact with Captain Oblivious. 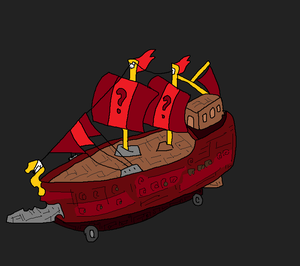 A picture of a Captain Oblivious' Ship.