Once, the Captain Emo was just a normal Emo guy, living the Emo lifestyle in a fairly blameless way.

One day, he was swimming at a nearby beach(OK we know that's not a very Emo thing but he liked flirting with his own mortality, or something). A big wave sucked him well out to sea and left him wondering about the mortality thing and also how the Hell he was going to get back, or indeed anywhere.

Having decided that he really did care after all, he paddled onwards and soon found himself in The Middle of Nowhere. When a Pirate ship appeared out of the mist, he was not very surprised, as it is known that strange things happen in the Middle of Nowhere. He was much more surprised when they pulled him out and told him that they wanted him to captain their ship. Apparently, they were impressed with the scars on his Emo torso, ignoring the fact that said torso was pretty weedy. It seems that this had led them to form the opinion that he was a fearsome Pirate captain who had gone down with his ship, again ignoring the fact that they had found him floating so he must have bobbed up again pretty quickly. We never said that they were very bright, after all, and seeing that they had lost their Captain and none of them even remembered how or where or even when, this kind of bears it out.

The crew asked him what his name was and fearing that if he told them, the truth would come out, he simply said: "Just call me Captain Emo". And so it was.

He now had a ship and a crew and some pretty cool clothes and so he set about becoming a proper Pirate Captain and soon was feared throughout the Middle of Nowhere and surrounding seas. His weedy torso filled out into an impressive six pack and this (and the pretty cool clothes) did him no harm at all with the ladies. He has read all the best Monstering books and is becoming quite the successful Monster, much to the delight of his crew, who are not doing too bad with the ladies either, on account of being part of a successful Pirate Monster team. Considering how most of them look, this is an achievement in itself.

The bad news for Heroes is that Captain Emo has now expanded his operations into the seas around Godville where he preys on unprepared Arks. Coming soon, to a Sea near you. Beware. Be very ware. 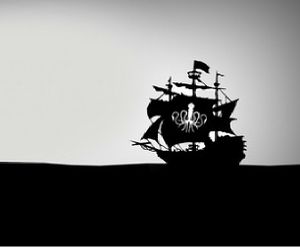