Yet, these revelations came at a cost. The guild became divided into two factions: the Scribes, who favoured peace, and the Paladins, who believed that they must defend themselves. These two groups almost went to war until the Scribes realised that they really had no idea how to fight and only had very few weapons. The pen isn't mightier than the broadsword! As such, a united Brotherhood continues their quest, aided by their very little-power armor.

The Brotherhood's emblem apparently shows the various diciplines that the guild offers and its various aspects. Their 'supposed' technological dominance is shown in the gear, their laughable skill of arms in the sword, the wings highlight their award winning (self titled) quest for knowledge and the new heights that they can reach. Finally the circle reinforces the unity that the guild displays. However, guild historians believe that all of this was just a happy coincidence, and that the emblem was in fact someone's bored doodle. 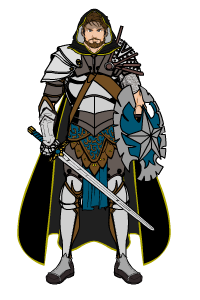 Parthalan   and is ever faithful, if a little dim, brown coat herald Gideon Thera, who finds that many things are, 'damaging his calm.'

The standard force of the Brotherhood, forged by couraged, but not quite as tempered as the paladins