The Boartender is an alcohol-serving monster that lures heroes with the promise of fresh beer.

The first known depictions of Boartenders date from before the invention of beer and ale. They hail from far and undiscovered corners of Godville, and started their wild career as barbours by offering sake to careless travellers. One hero refused to drink with a boar, quoting as his reason, "I cannot drink with a monster—my wife will kill me," which usually isn't a good enough excuse for a budding Boartender. So it ate him.

When the Boartenders arrived in Godville, they found the situation was reversed. A multitudes of heroes wanted their beer, all their beer, and without paying for it. Therefore, Boartenders had to adapt. In defence of their beautiful bars and their way of life, they decided to attack and eat every hero who didn't leave payment and a nice tip.

Boartender and his beer receptors[2]

Monster is a big bipedal boar, usually accompanied by a bar full of the best beer any hero has ever seen in his life. The Boartender looks hospitable and hearty at first, but becomes fierce and unapproachable the instant the hero "forgets" to lavishly tip it. Young Boartenders are indistinguishable from normal boring piglets at first sign but they never refuse tips.

The color of its skin, and thus its durable bristles, depends on which beverage it favors. Beer gives it a coloration from light amber shade to dark brown; wine, a dark reddish tint; eggnog, a nice creamy beige; and colored drinks ensure a glaring inability to hide in greenery.

The Boartenders' Guild considers drinking transparent drinks like sake or vodka to be in bad taste.[3]

Its mortal enemy is the Beerserker, who often destroys its sleek bar. 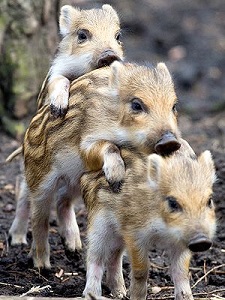 Young Boartender piglets learn how to reach the bar