The Blade Runner is a monster known for being a sneaky little thief. They're fast, acrobatic, and pretty difficult to catch. Their motivation for attacking you appears only to be to steal items from your inventory. To this day, no one really knows where they're from or what they are really are, because, among other reasons, their clothing, particularly their hat, tends to cover their faces. These monsters tend to wear dark red coats that have orange arm sleeves; dark red pants; orange jester boots; and an orange witch hat with which they use to cover their gray skin. These monsters always lug around two or more swords, so be careful. It has been reported that heroes who had underestimated them end up badly injured. Though they're small, they're pretty skilled fighters and have an aggressive personality. 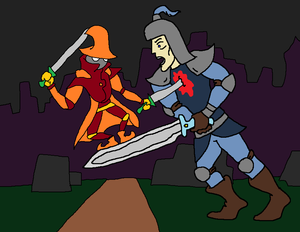