The Bee Holder (Apis Ecce) is a monster. It is well known that beauty is in the eye of the beholder. As such, the honey this monster possesses is often sought out by narcissists. But beware, the Bee Holder's remarks are often stinging!

Origins of the Bee Holder

The Bee Holder's true form is said to be utterly confusing to behold. They also do card tricks. Only with bees. 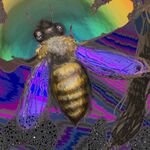 The Bee Holder's bees seem to be no different from apis mellifera or honey bees.

The bees of the Bee Holder seemed to have formed a symbiotic relationship with the machine organism, for the protection it offers to their hive and the added benefit of seeing the sights the Bee Holder happens to behold.

The Bee Holder will attempt to confuse a potential attacker as a first line of defense, but if threatened may attack with its own bees, who like ordinary bees have a stinger that breaks off and kills the bee when used, so this is usually a last resort.

The sting of the bee of a Bee Holder induces a state of extra-perception, revealing everything one sees in unmitigated, glorious beauty, from the sight of the setting sun to the piece of lint stuck in one's navel. This way of beholding is unbearable to most humanoids, who in general regard simplicity and beauty as synonymous due to their relatively underdeveloped senses.[1]

This effect is theorized to be imparted to the bees following Bee Holder inhabitation, as when the toxin is examined alchemically, it is found to be identical in comparison to that of the toxin of ordinary bees.[2]

The honey of the Bee Holder is prized for its supposed beauty benefits. The claim that the insect milk reverses aging, which some proponents of api-ecce-therapy make, remains unsupported by evidence-based medicine.[3]

The honey does seem to possess the same nutritional benefits of ordinary honey with no apparent aberrant side effects, suggesting that the bees of the Bee Holder are, in fact, ordinary bees.

The honey is incredibly difficult to obtain, however, owing to the fact that the only way to remove the honey from the hive is through the tear ducts of the mechanoid. In other words, one must attempt to make the Bee Holder cry. The Bee Holder will engage in flame war combat if challenged, but be warned, the Bee Holder's lack of tongue is as sharp as any stinger.