From GodWiki
(Redirected from Beastie)
Jump to navigation Jump to search 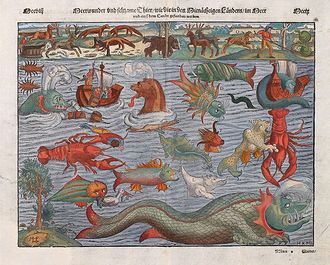 Beasties are terrifying sea monsters that inhabit the depths of Godville’s oceans. These denizens of the deep are known to feast upon any ship that dares come near, and some are even known to hunt down any nearby prey that wanders into their sight.

Landbound heroines don’t have to worry about these creatures, but once the heroine completes her ark and decides to go sailing, she soon discovers that the sea is swarming with these monsters. Like their land counterparts, a beastie often has loot, be it in the form of fresh water supplies, healing oil, a hint pointing to the nearest treasure, or even the treasure itself. Some beasties even have fenimals in their bellies or on their backs, which will prove useful to any heroine trying to preserve the wildlife of Godville.

However, getting the loot is not so easy. Beasties are nimble animals, and may sometimes attack the heroine before divine influence can reach the sea, an ability that can prove fatal to a heroine if her ark is badly damaged already.

The heroine who defeats a double-named beastie might receive:

Although every fenimal is accompanied by lesser treasure, the fenimal occupies only a single slot in the heroine’s ark. The crate (or gold reward) appears only when the heroine returns to Godville at the conclusion of the sail.

The enterprising heroine must collect 1,000 pairs of both types of creature — fenimals and manimals[9] — as a prerequisite to opening their lab. To create a lab boss, she must then accumulate an additional 100 pairs. Therefore, players continue to accumulate manimals and fenimals even after the first thousand pairs have been obtained.[10]

To date, the strongest beastie encountered was a double-named beastie with 64 HP (Sea Harpoonia) fought by

Cham Almighty  . If you encounter a beastie with higher HP, please update this information.