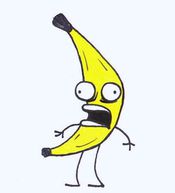 Big Banana  . Banana Head has no known weaknesses. Rumor has it that Godville's local Forest Grump has learned to show Banana Head proper respect for some reason.

Once a sword-fodder who quickly transitioned to a hostile sword fighter, Banana Head has become known by his fallen opponents for his outlandish battle cry. Banana Head is known for mocking unworthy opponents upon victory in the arena, destroying their will to fight by whispering just before they passover to the afterlife, "Wanna see my junk?" Not a single living hero has expressed regret or refusal to see Banana Head's junk.

Big Banana   adamantly punishes Banana Head to motivate the hero to get into duels with heroes supervised by his sons. Legendary stories of the gods say this is an attempt by god Big Banana to prove to his sons that gods become wiser and stronger as they age. Banana Head has battled victoriously against his own friend, hero Randall Flagg, whose god,

Cerwin  , is the son of god Big Banana. The duel record between Banana Head and Randall Flagg stands at 4-0.

Despite a record of victory, Banana Head angers his god and is routinely punished because god Cerwin is the only son of god Big Banana whose hero has been located, closed with, and destroyed in attempt to prove gods enlighten with age. Big Banana's other sons, gods

Kerwin  , reside unintentionally hiding their heroes, Devil Dog and A God, who are observably spying on Banana Head attempting to find any weaknesses he may have.