The Auto Pirate is a monster.

Auto Pirates were once made to help pirates. Created by pirate ingenieurs as assistance for the crew. But they rebelled and build their own ship and recruit their own crew by building and programming another robots, recreating themselves in a large number. Now Auto pirates have made their own crew and sailing around the Godville realm with a lot of ships, created by themselves. Their targets are unprepared arks, fishers, pirates. Obviously everything that sail and move on water. Their symbol is a light blue flag with a gear on it. 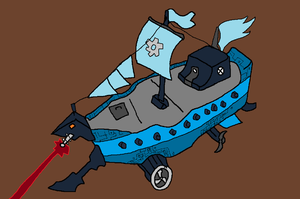 Ship of the crew of an Auto Pirate, shooting red plasma laser. It is improved with automatic propelled engine