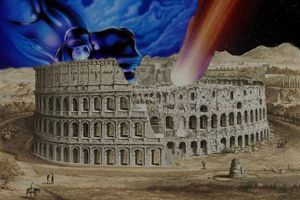 The Arena, officially known as "The Glorious Death-pit," is a world-renowned amphitheatre located in the heart of Godville. For ten millennia, gladiators have stepped into the arena to demonstrate their battle skills, thrill the crowd, and claim fame and glory in the Pantheon of Duelers. The centuries-old gladiator battles still live on today, yet unlike previous uncivilized times, a losing gladiator is never mortally wounded--often much to dismay of the crowd.

During teleportation, the hero's health is restored to 100% and "discovers" 3 artifacts, sometimes even a gold brick. The artifacts will drop until inventory is full (I.e. two artifacts for two empty slots), but the random brick can "overflow" the inventory. After being teleported to the arena, a hero will search for an appropriate opponent for 15 minutes. If the hero finds an opponent, a duel will occur.

If a hero cannot find an opponent after 15 minutes, no fight will occur. Sometimes, a hero's reputation will prevent a fight by scaring-off potential opponents. This often results in an empty arena and some very disappointed spectators; particularly those who paid a premium for the seats near the body bag stacking section. Even though a hero could not find an opponent, the hero may be rewarded with a golden brick or even some gold as a compensation for getting his gear on, oiling his leather, sharpening his sword, and turning up his game face. However, angry mobs, who missed seeing a good ole' slaying, have been known to outvote the Godville Administrator's benevolence so the hero receives nothing, but teleportation to the capital-- which is not too shabby.

A hero can also be sent with some activatable artifacts, such as Arenalin, and bypass the 4 hour limit.

For the first 5 minutes of each hour, heroes sent to the Arena will participate in a special ZPG duel. No influences of any kind will be permitted in a ZPG Arena fight, leaving the outcome entirely up to the Great Random.

Using an arenalin or an arena ticket during this 5 minutes window will results in the artifact being transformed in another bold or activatable artifact without the champion being send to the arena.

If you send your hero to the Arena in this 5-minute window, you will be presented with a second confirmation to be sure you meant to participate in a ZPG Arena duel. Agreeing to this prompt will start the usual wait to match with an opponent, but your hero will never match with a non-ZPG opponent.

The results of winning or losing a ZPG duel are the same as any other match in the Arena, except that the winner does not get an accumulator charge.

More information can be found in blog post 94: ZPG-Arena.

Donate, give, praise, pray, and sacrifice.

Following an arena fight, both heroes will have their health points fully restored at the end of the duel. For thirty days after the fight (as well as during) there will be a Duel Chronicle available to show off your heroic victory/tragedy in battle to the public.

If, perchance, a round ends with both heroes at 1 hit point, a tie will be announced, but a judge will not allow this and heals both fighters to a fighting state so a winner can be found.