A big welcome to the Alpha and Omega guild!

A friendly request to anyone that wishes to see changes made to this page, please request this from our Guild Leader or one of our Elders mentioned below. Thank you kindly!

"The Alpha and the Omega of whom alone the end becomes beginning, and ends again at the original beginning without any break"

The guild was actually founded twice. When our founder

Eric 4 President   first started exploring the world of Godville, he founded the Guild and assumed he had it sorted. However little did he know that starting a Guild would require a lot of effort. And in a moment of absence his hero Lola the Obedient decided to leave the Guild and join another. Being the only member at the time, this caused the Guild to be disbanded.

Feeling empathic, Eric 4 President decided to show mercy to Lola the Obedient mainly because of her obvious lack of cognitive ability. He gave her another chance and so the Alpha and Omega guild was started again.

Eventually, Eric 4 President was called away from Godville by the roaring crescendo of reality, and could no longer carry out his duty as the illustrious leader of the guild. At that time, The Lady Phoenix stepped up and assumed the mantle of leadership, which she has held ever since.

Now we are well on our way to becoming the greatest guild in Godville. However we need your help to make this happen. But how I hear you ask?

1. Use the encourage or punish command while in a town and with a bit of luck your hero might just put in a good word to increase our guilds popularity.

2. Fight duels! This will help increase the guilds duelery rank.

4. Encourage others to join! Ask friends to join or promote the guild in the forums. If someone or you wants to join give your hero the voice command
join the "Alpha and Omega" guild. Again this will work best when your hero is idle. Like right after he/she has defeated a opponent. 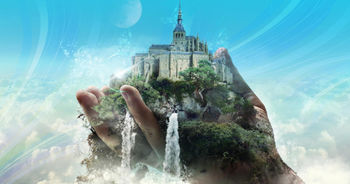 Our guild hall is located in the Alpha and Omega Cloud Castle. We haven't been able to determine who exactly the hand that holds it belongs to, but we have been given a low sneeze risk. Difficult to insure, but cheap rent. Bar is located at the tip of the pinky, training grounds at the middle finger, meeting hall at the center of the palm.

Currently, our fellow member Emilia the Eggplant has been acting as our Head Gardener to ensure proper care of the hanging greenery. Please direct all topiary requests to her.

Directions: Follow the neck down to the shoulders, then take a left and keep going straight. Can't miss it!

Eric is leaving the game, and we are all sorry to see him go. Everyone will miss him.

(These are the voting members of the guild and have been loyal for a good length of time.)

Second in command to the Guild Leader

Sadly no longer a Godess, but remains in the guilds hearts.

Lord of Puns. Creator of Baloo, the God of Monsters.