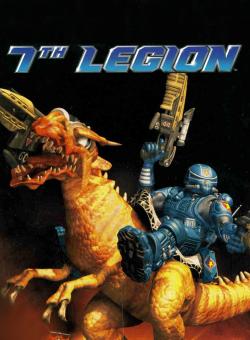 There was a time, in which every dad had to have that special talk with their son.

That talk contained: Dinosaurs, robots, and guns- or in short, the 7th Legion.

The 7th Legion is not to be confused with the seventh legion. No, the 7th Legion has not the time for so many letters. In fact, the 7th Legion wanted to be known as the 7 Leg, but were bombarded by haters with letters insisting they add another Leg and an 's' to the end of their name (ugh, those spider-huggers). The 7th Legion have bigger fish to fry. In fact, the heroes of 7th Legion hold a monthly Outdoors Competition and Cook-Off. After the catching of Coy Fish and the hunting of Acid Reindeer, the heroes gather 'round the campfire to roast and sing songs of merriment. Last month they finally stopped receiving threats from Smoky the Scare Bear- thanks to the previous forest fire which was totally not set by a member of the 7th Legion. The Pseudo Nymphs are thankful to be flea-free. For those heroes who are busy out questing in honor of their gods and goddesses, a word-a-day epic is being written with the help of mailer pigeons. Unfortunately, these mailer pigeons are trained by the heroes themselves, and don't ever seem to reunite with another hero of the 7th Legion. It is also assumed the lost words are gibberish - but epic!

The 7th Legion is made up of an array of characters. Males, females, questionables, and non-concerned all bind together in the daily celebration of being awesome. Heroes meet at the secret guild headquarters to compare battle scars, measure the length of their swords, and exaggerate the tales of their trials. 'Bring a Friend Friday' has been restricted to only pets and other guild-members. (Monsters are welcome at mealtimes, but, please, pre-cook them to avoid that fiasco which happened a few years ago when you-know-who brought an uncooked you-know-what which turned out to not even be dead. Boy was that a mess!) Currently, the 7th Legion Guild stands at a number of members. The heroes have tried to count heads, but always count themselves as "1" and never first, causing the counting to perpetually to start over. It would also help if everyone could be in the same place at the same time, or if the heroes could count above however many fingers and toes they have remaining. The gods and goddesses of the 7th Legion are strong of might, willful of mind, and sleight of hand. Omniscience is a choice; omnipotence is a gift. The heroes can't spell either word, much less respect what a full-time job being a deity entails. The guild headquarters provide a space for the stressed to unwind their springs and enjoy a mug of beer.

The 7th Legion is so much more than fun and games, though. The 7th Legion is full of hard-working heroes who go out on quests every day to battle dangerous foes and loot valuable goods. The stalking and hunting of an apocalypse cow or a thesaurus rex may take minutes, minutes the hero would rather be spending in a tavern or admiring his reflection in a pond. The effort it requires for a god to keep his hero on task is exhausting. The gods of the 7th Legion require daily worship and an abundance of gold bricks. The sheer willpower it takes for a regular hero to finish a quest is simply unnatural. 7th Legion heroes are groomed into prime condition; attention spans are honed to a... a nub of some sort, which is really painful, like stubbing your toe. It takes a special combination of godpower, coins, and face-palming to get in the same great shape as those in the 7th Legion. It takes more than just luck. To be in the 7th Legion, it takes the brains of a dinosaur, the heart of a robot, and the personal accountability of a gun.