The Time Fly (Rapax vetust) were known as the 'Naggy old people' of the late 100 g.e. They were a long-lasting generation who's age till know still remains unknown. This is due to their powerful spirit called "Halo of Horror Monsters" who fed on the terror and fear of main characters and their cannon fodder friends. Because of this spirit, the Time Fly turned slimy, wrinkly and more fly-like as time passes. That also became the reason why the Time Flies were honourably mentioned in "The Most Hideous Monsters of Godville" section part of the Godville newspapers (now removed due to the hordes of protests led by offended monsters).

Now with the rising of one-man religion led by 'heroes/heroines' preaching about their so-called Gods, the Time Fly can finally brag the heroes/heroines to death about their generation when they had a massive amount of following from monsters who idolized them. Not only that, the Time Fly loves idiots, of all things and is willing to scare the hero with these so-called 'history' lessons. 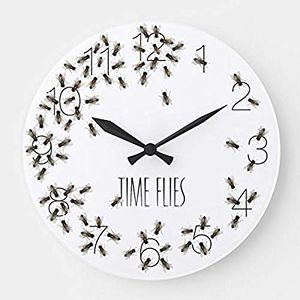 A Time Fly youngling in the making
Retrieved from "https://wiki.godvillegame.com/index.php?title=Time_Fly&oldid=116110"
Category: