Difference between revisions of "The Inquisition" 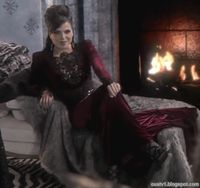 I am one of the Old Gods of Thedas, Razikale my name,the Dragon of Mystery. Once I was worshipped by the great dark archons of the Tevinter Imperium, but legend has it I am destined to become corrupted and bring the next Blight to the world.

After the Tears in the Veil, I found myself awakened from a deep slumber. Freed from my eternal prison, I traversed through the ages, both time and space.

I smoked a hookah with a worm while playing cards with a Mad Hatter. I sided with an Evil Queen against the "Fairest of Them All", and I even put another Princess to sleep. I caught an Electric Mouse with a red ball and lost it somewhere... I even traveled in a blue box with a mad man calling himself "The Doctor" and sat on an uncomfortable iron throne. The last thing I remember is giving a commander three choices to stop a war that lasted through hundreds of cycles.

Godville is my home now and I plan to establish my worship once again before the great battle. A battle that not I, not anyone ever predicted. A battle that will plunge the world into the abyss. A battle that we will prevail through our champions. My purpose for the future is simple, but as the Dragon of Mystery, I cannot disclose it yet. Through this guild, neutral and evil aligned heroes are welcome to join. Just pray to your God join the "The Inquisition" guild and your prayers shall be anwered.

A crazy old woman once told me:

"Well, well... what have we here? Are you a vulture, I wonder? A scavenger poking amidst a corpse whose bones have been long since cleaned? Or merely an intruder, come into these monster filled wilds of mine in search of... easy prey..?"

"Hurtled into chaos, you fight... and the world will shake before you. Is it fate or chance? I can never decide."

"Change is coming to the world. Many fear change and will fight it with every fiber of their being. But, sometimes change is what they need most. Sometimes change is what sets them free. The world fears the inevitable plummet into the abyss. Watch for that moment... and when it comes, do not hesitate to leap. It is only when you fall that you learn whether you can fly."

When I was crossing the continuum I kept hearing these words:

"I’ve seen more of this war than you can imagine. None shall be untouched by the fires above. Faith lies in ashes. Our fragile alliances crumble to dust as this world is torn asunder. Darkness closes in. Will you stand against it, or lead this world to its bitter end?"

While expecting the other Gods of this world to fight or join with us, I will make sure The Inquisition rises. Gather your champions and choose your side.

The Trident is an ancient and powerful artifact that once belonged to Poseidon, the Greek God of Sea. How i acquired it, I cannot remember.

As a symbol of The Inquisition, it is to give a message to all opponent enemy factions that they will be cleansed, just like the water mercilessly cleanses everything on Earth. It will also be used to create life in the future, but it will require a vast amount of collective power to influence the ideabox. This is an important aspect and will be soon expained.

All members of The Inquisition are named Agents. While all are obliged to protect the innocents, how they proceed is up to them.

The centrals of the guild are located in Monsterdam and outside of all the towns forts are built to investigate and smite the horde of monsters. The Agents are ranked and knighted by the The Inquisitor, my first Agent and representative in this world. Upon joining The Inquisition a silent oath will be given, along with the Emblem. Bearing the Emblem means you get free healing by specialized agents in towns, discounts from traders and cold feet from monsters.

During the day, Agents are allowed to speculate on the Past, Present and Future while figuring out a way to close the rifts in the space-time continuum.

Each and every realm I have passed through on my travels has had its own rules. It appears in Godville a God has little to no influence in the hero's life. However, we are all given a remote control and we can use Voice commands.

All Gods who have Agents of The Inquisition, are required to use punish to harden their personality. It is very important to train the Agent that way. Evil personality is NOT about killing innocents, but ruthlessly facing the everyday traps and influences of the monsters, recognising who works to undermine The Inquisition, being invicible to corruption.

Still under the rules of this realm, Agents are expected to be tempted during their day. Wasting time writing all day on their diary and spending money on taverns is acceptable.

However, all Agents have to get dirty once a day. Using the voice command dig may guarantee an adventure to a dark dungeon and slaying Boss-Monsters . Defeating the Boss results in the safety of the innocents and the rewards are vast.

Agents who engage this activity may post their participation here and make themselves known to the rest of the world.

VI.All Magic comes with a Price

Beware, my Agents, when using magic. It may seem a means to end, but is also a means to a beginning. I come from a world of magic, I crossed lands of magic and lands without magic. I have tapped into the source of magic. Was magic that brought me here? Did we all pay the price? Allow me to enlighten you with two types of curses.

It seems this world is unaffected by this horrible curse and as a witness of it, I am relieved it cannot be enacted again.

During the Dark Curse Your prison.. all of our prisons, will be time. Time will stop, and we will be trapped. Some place horrible... where everything we hold dear, everything we love, will be ripped from us. Where we suffer for all eternity, while the Queen celebrates, victorious at last! No more happy endings.

I have gained many names while using this curse during my travels. Maleficent is what they most call me. With the use of tecnology and alchemy, the methods to enact the curse and put its victim into deep slumber have evolved.

However, since I no longer hold its secret, I highly advise my Agents to avoid eating anything that comes from red juicy apples. Green apples are safe, as long as they are not painted. Also, never touch the spindle of a spinning wheel.