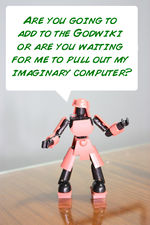 The Sarcastic Samurai (Miles hipponacteus) is a monster. What did you think I am, a sushi bar run by Europeans?

The Sarcastic Samurai grew up in a life of privilege in the noble ranks of Japan. Ok, really, like there's another way a Samurai grew up; tell me something I don't know. Unfortunately, his father and seven older brothers instilled upon him a sharp wit by constantly mocking his intelligence with extreme sarcasm. Actually, I gained my skill for insight and elegance from reading Sarcasm for Dummies.

(More... No one would have guessed there is more to read...)