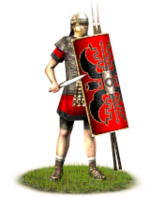 The New Times Roman (romanus novus tempus) is a monster. It is a Roman legion soldier who has found his way to Godville but is erroneously labeled as a monster because of a lack of a god in Godville.