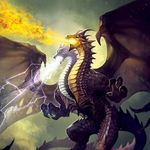 Double Dragons are one of the strangest and most feared monsters in all of Godville. However, they are well-known for their wisdom and honor, and will occasionally become a "pet" of the most powerful heroes. Unfortunately, it has been rumored that this well-known wisdom and honor is all an elaborate facade, so that the dragon may befriend mighty heroes in order to better understand how to most painfully and ironically kill them later at an inopportune time. Also, they are rumored to be very passive-aggressive and secretly use their great wisdom to plot newer and more expensive ways to cost heroes gold in upkeep and grooming.(more...)