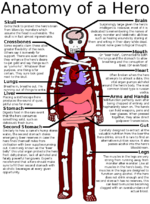 Upon a God's entrance into the Godville universe, a hero is born into the world of Godville as the champion and representative of his God. These newborn heroes are always weak, inexperienced and devoid of any skills.

They lack equipment to defend themselves from powerful monsters and the occasional attacks from other older heroes. Like their Gods, newborn heroes lack knowledge of Godville's customs and traditions. Gods with newborn heroes are often heard commanding unintelligible noise to their heroes who respond with equal confusion.