Difference between revisions of "Sun dog" 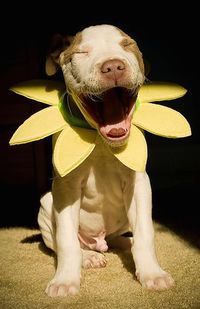 While yet toothless it is possible to see a Sun Dog smile, but very dangerous as the mothers are very protective. This image was from a camera found in the woods in a small clearing with obvious signs of a struggle and a lot of blood over the ground and trees.

The elusive Sun Dog is a beautiful purebred mutt. It has a glossy coat of the purest yellow and teeth that sparkle like a vampire whenever it smiles, which is due to the many taunts for sparkling teeth from the local heroes when he was a pup. The difficult childhood has made the Sun Dog a ferocious fighter and a loyal companion, as long as he is kept in his place by constant taunts and you never turn your back on the Sun Dog.

The Sun Dog has been known to suddenly go into the bushes and retrieve items that have been misplaced by others. The Sun Dog is best known for having a venomous bite. Lesser known is that the fangs do not develop until later in life, leaving young Sun Dogs vulnerable to marauding and murderous unicorns, who prey on the Sun Dog and incorporate the shine of the Sun Dog into their own pelts.

Prior to acquiring fangs the Sun Dog can rub against the enemy, striking him with high voltage discharges of static electricity. This mode of attack however is limited by a rather large time to recharge, and will not work in wet weather. It is also possible for a unicorn to die when attacking a young Sun Dog if there is a large static charge and the weather is exceptionally dry.

The natural death of a Sun Dog can be quite spectacular, depending on the size of the dog. A smaller sun dog will simply find a secluded spot curl up and die. Large Sun Dogs on the other hand develop several different conditions which ultimately end in catastrophe. First, as the dog ages, the bowels stop working as efficiently, requiring the ingestion of large amounts of fiber in the diet. Second, the memory starts to go and the Sun Dog becomes quite forgetful. This results in the Sun Dog forgetting to take his fiber supplement, resulting in bloating and the dog swells. Eventually the Sun Dog pops, and the pent up static charge ignites the escaping gasses causing a terrible and violent explosion.

It was long assumed old Sun Dogs would attack their masters and run away at the end of their lives, due to the large number of Sun Dog owners who had horribly messy deaths. Tragically, this was proven not to be reality. The first ever tamed Sun Dog, Sonny, worked in the circus, and proved most extraordinary, living far beyond the typical life span of the breed and reaching a far greater than average size. As age began to ravage Sonny a close watch was kept on him lest he turn on his masters, but he was allowed to continue to perform; he lived for the audience. The day after his 150th birthday (dog years) at a large party in his honor, he exploded while performing, killing over 3000 women, children, and heroes. There were no survivors of the tragic event. Eventually, as heroes were revived by their gods, the story of their horrific demise was pieced together. In modern times most heroes will will either end the life of their pet personally, so they can die with dignity or, more often then not, they will simply abandon the poor Sun Dog tied behind the shop of a person who cheated them in life.

On cold winter nights it is quite common to see Sun Dogs and the homeless sleeping together in large huddles. The dogs warm the hobos, and once the hobos fall asleep the dogs attack them and enjoy a warm supper. It is recommended to wear sun glasses when around Sun Dog to avoid eye damage, and one should never enter a staring contest with a Sun Dog as severe eye damage can occur. Sun screen is also advisable, as well as having the Sun Dog alternate walking on the right side and left side of the hero to provide an even tan.