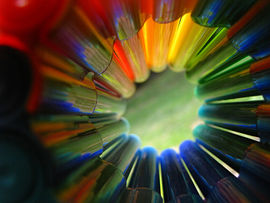 This shield seems to be shaped from a meta-material with special electromagnetic properties. It splits the light into its full spectrum then channels it around whoever is holding it. Inbuilt magic amplifies this energy forming what is in effect a force field.

On the annual Rainbow Festival of Beerburgh, the rain poured and the sun shone, as it always did at this time. Seven rainbows appeared, stretching over the horizon as far as the eye could see. As dictated by tradition, eight Heroes were to head to the end of a rainbow to supposedly find a pot of gold. Nobody ever found the end of a rainbow and all this was known to be old rubbish but everyone is comforted by traditions so they carried on and did it anyway. After a day of running towards the end of a rainbow, they were shocked to find that there was actually an end to a rainbow, but what was so remarkable was that not just one, but all of the seven rainbows in the sky all merged at one particular point on a small remote hill. Hidden in the tall grass, all the ends of the rainbows converged upon a lonely wooden shield. The Heroes, too shell shocked to make sense of any of this, all left the shield behind and returned to their families, never to tell anyone of this strange occurrence. twenty one years later, a wandering trader rediscovered the shield, but by now it had absorbed all the magic from the numerous rainbows which had all ended on top of it for all those years. Not knowing of its potential, the trader foolishly sold it off. Many years later, the shield had travelled around from hero to trader to hero to hero to trader... And so on. Now, The whereabouts of the shield at any one time are unknown for it changes hands so often. Many duplicates have been produced, but nobody has managed to copy it exactly. However, an alchemist recently claimed to have cloned the shield using an ancient potion he allegedly found in the tomb of Cryrn, but a Monster apparently stole it from him soon after. Nobody really believes him.