Difference between revisions of "Milestone 554" 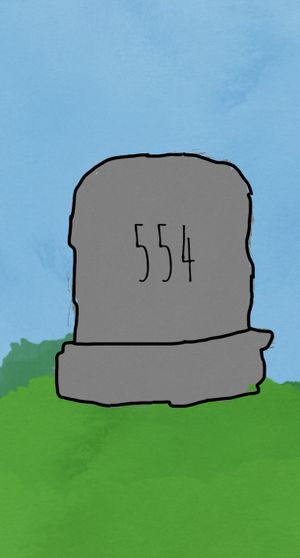 Back before the Big Beta there was nothing. Then the world began when the Godville beta was released in English and at every mile, or thereabout, a stone fell from the sky marked with a number, starting at 0 and presumably going on infinitely. Milestone 554 was one of those stones. That was the most interesting thing ever to happen to this stone, aside from a hero once graphitying their name on it a few years later.

One day, a certain god took a liking to this rock and made a godwiki page for it. That god was

Gazer of Azguard   and they wrote the text that follows:

Milestone 554 is a random milestone. No one knows why this page was made, but no one questions it. It... It was just made.

This milestone is a rock with the numbers 554 on it and some unreadable scrawl across one of the sides. Pretty much like the picture included here

Milestone 554 is a random milestone. No one knows why this page was made, but no one questions it. It... It was just made. Should one gather the courage to question it's creation, the likelyhood of that someone soon ceasing to exist becomes astronomical. So, just don't. It's best to listen to the warnings, if you value your existence, that is.